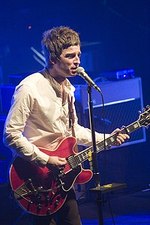 Noel Thomas David Gallagher (born 29 May 1967) is an English singer, songwriter, record producer and musician. He served as the songwriter, lead guitarist, and co-lead vocalist of the rock band Oasis. After leaving Oasis in 2009, he formed and became the lead vocalist, guitarist, and songwriter for Noel Gallagher's High Flying Birds. Oasis had various line-up changes, though Gallagher and his brother Liam remained as the staple members. More about Noel Gallagher

Current items with a signature of Noel Gallagher

These are the most current items with a signature of Noel Gallagher that were listed on eBay and on other online stores - click here for more items.

Traded items with a signature of Noel Gallagher

Most recently, these items with a signature of Noel Gallagher were sold on eBay - click here for more items.

It's a record! Vinyl sales to hit two million this year as Noel Gallagher tops n (04/12/15): Last year saw more than one million albums sold on vinyl for the first time in almost two decades after seven years of steady growth. This year the number is expected to rise to two million.

Noel Gallagher: Oasis Could Never Happen Again (04/02/15): Noel says that there's no way that a new band will take over the world in the same way Oasis did - and he doubts if rock and roll will ever be as big again in the UK.

It's a record! Vinyl sales to hit two million this year as Noel Gallagher tops n (04/2015): Last year saw more than one million albums sold on vinyl for the first time in almost two decades after seven years of steady growth. This year the number is expected to rise to two million.

Noel Gallagher: My solo career has cost me loads of cash (03/2015): Launching his own record label and solo project has cost the rock star a lot of his Oasis fortune.

Noel Gallagher: Producing albums is easy (02/2015): The former Oasis star doesn’t mince his words when it comes to music producers, and reckons he could do their job without breaking into a sweat.

Noel Gallagher Fears Car Crash Death With Paul Weller (01/2015): Noel Gallagher dreads getting a free ride from his pal Paul Weller as he is convinced the rocker's dodgy driving will kill them both in a crash.

Noel Gallagher: 'I'll get back with Oasis for half a billion condoms' (12/2014): Oasis founder jokes about recent rumours surrounding a reunion.

Noel Gallagher on the Oasis for Glastonbury rumours: "I'm available that weekend (11/2014): Noel Gallagher has poured fuel on the rumours that a reformed Oasis might play Glastonbury in 2015 in an exclusive interview with XFM's Jon Holmes this morning.

Noel Gallagher (08/2014): Noel Gallagher was the main songwriter and lead guitarist with nineties rock legend Oasis, alongside his brother Liam. The two have a tempestuous relationship and he now fronts his band High Flying Birds.

Stars Come Out For Noel Gallagher's Birthday Bash (05/2014): Lindsay Lohan , Lily Allen and Kylie Minogue were among the stars who turned out to help British rocker Noel Gallagher celebrate his birthday at a party in London on Thursday night (29May14).

Noel Gallagher Shrugs Off Oasis Reunion Rumour (04/2014): British rocker Noel Gallagher has shrugged off rumours his former band Oasis are planning to reunite, joking that he would reform for a lifetime's...

Noel Gallagher reviews Oasis videos and hates them all (01/2014): Hear an edit of Noel Gallagher talking his way through Oasis's videos - and dismissing them all Guardian music

Awkward! Noel Gallagher Trumps Brother Liam To Be Crowned 'Most Stylish Rock Sta (06/2013): Noel Comes Out On Top In The Battle Of The Brothers