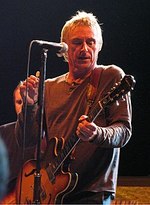 Paul John Weller (born John William Weller; 25 May 1958) is an English singer-songwriter and musician. Weller achieved fame with the punk rock/new wave/mod revival band The Jam. He had further success with the blue-eyed soul music of the Style Council (1983–1989), before establishing himself as a solo artist with his eponymous 1992 album. More about Paul Weller

Current items with a signature of Paul Weller

These are the most current items with a signature of Paul Weller that were listed on eBay and on other online stores - click here for more items.

Traded items with a signature of Paul Weller

The most expensive item with a signature of Paul Weller (THE JAM - UNIQUE FRENCH PROMO PRESS 7 PRETTY GREEN WITH SIGNED £1 - PAUL WELLER) was sold in June 2018 for £999.99 while the cheapest item (Paul Weller (Burnley) Signed Card) found a new owner for £0.50 in February 2017. The month with the most items sold (52) was July 2020 with an average selling price of £63.47 for an autographed item of Paul Weller. Sold items reached their highest average selling price in August 2016 with £229.99 and the month that saw the lowest prices with £0.50 was February 2017. In average, an autographed item from Paul Weller is worth £31.55.

Most recently, these items with a signature of Paul Weller were sold on eBay - click here for more items.

Paul Weller is back with a new album and arena tour (03/13/15): ONE of the most influential musicians of the last 40 years has announced a 12th solo album – backed by a UK tour including a date on Tyneside.

D_Blackhurst published Reviewed: Paul Weller in Hanley (03/13/15): AFTER years of treating audiences to greatest hits sets from previous incarnations, Paul Weller was back to his uncompromising best last night. Gigs of late from this indestructible legend have been peppered with tunes from his former lives in the Jam and Style Council. In face, the last two times I

"I Told Him It's Too Long!" Noel Gallagher Offers Paul Weller Songwriting Tips (02/2015): Noel says that he's been working on the Modfather's new album - but thinks Weller is going to ignore his advice on how to improve his songs.

British Summer Time tickets to see The Who and Paul Weller headline in Hyde Park (11/2014): The gig will be the third time the band have headlined the royal park, and the fourth time they have played there – having also played the Live 8 show in 2005.

ON:OFF - Paul Weller, Arctic Monkeys, Beth Ditto and more - in pictures (10/2014): In collaboration with War Child, portrait photographer Tom Oldham has spent five years capturing the candid moments before and after artists perform for his ON:OFF project. Featuring Liam Gallagher, Janelle Monae and more, heres a selection of these images

Paul Weller plans Motown record (09/2014): Paul Weller's next album will have an ''old R&B, Motown'' sound and will be released next year.

Paul Weller at Audley End Picnic Concerts (07/2014): The picturesque heritage site was brought to life as The Modfather kicked off this year’s picnic concerts at Audley End House and Gardens. Paul Weller took to the stage - still very much a style icon at the age of 56 - and begun with his 90s hit Sunflower.

Review: Paul Weller, Dalby Forest (06/2014): “This is better than Metallica on a Friday night” chirps Paul Weller, alluding to the heavy metal giants headlining Glastonbury in a rather bigger, and damper, field than the one we’re all standing in at Dalby Forest.

Paul Weller's children entitled to damages for misuse of personal data from pape (04/2014): Three of musician Paul Weller's children had a "reasonable expectation of privacy" when shopping with their father in Los Angeles and this was breached when a newspaper published photos online showing the children's faces, the High Court has ruled.

Paul Weller Fights Mail Online over 'Intrusive' Photos Of Children in Los Angele (03/2014): Paul Weller has launched a privacy battle against the publishers of the Mail Online after photos of his three children was published on the internet. Weller is taking on Associated Newspapers in a rare privacy lawsuit, alleging images of his family on holiday in Los Angeles were 'voyeuristic', the H

Paul Weller added to Benicassim bill (02/2014): The Modfather has been added to the line-up for the Spanish festival, which takes place between 17 and 20 July in the seaside town that lies between Valencia and Barcelona.

Lady Gaga Birmingham date announced as Paul Weller sells out (01/2014): Lady Gaga has announced she is bringing her Artpop Ball arena tour to Birmingham this autumn.

Paul Weller - The Changing Man (09/2013): The storming opening of the seminal Stanley Road album, The Changing Man takes its cue from the riff to ELO's 1972 hit 10538 Overture, but Weller takes full ownership of the song, making one of his most sonically interesting tracks.

Paul Weller's wife posts picture of her massive baby bump but is it the biggest (07/2013): It's been 18 months since she popped out her twins John Paul and Bowie (Wow one of them lucked out on the names front). But Paul Weller’s wife Hannah Andrews posted a flashback shot of her mahoosive baby bump on Tuesday (does she know it's meant to be 'Flashback Friday'?)

Paul Weller: Boozy Drinking Session Was Responsible For Hit Record 'That's Enter (06/2013): The Star Had A Couple To Drink!