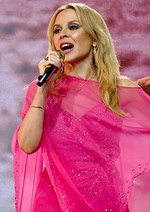 Kylie Ann Minogue AO, OBE (/mɪˈnoʊɡ/; born 28 May 1968), also known mononymously as Kylie, is an Australian singer, songwriter and actress. Minogue is the highest-selling female Australian artist of all time, having sold over 70 million records worldwide. She has been recognised for reinventing herself in music and fashion, for which she is referred to by the European press as the “Princess of Pop” and a style icon. Her accolades include a Grammy Award, three Brit Awards and 17 ARIA Music Awards. More about Kylie Minogue

Current items with a signature of Kylie Minogue

These are the most current items with a signature of Kylie Minogue that were listed on eBay and on other online stores - click here for more items.

Traded items with a signature of Kylie Minogue

The most expensive item with a signature of Kylie Minogue (KYLIE MINOGUE SIGNED RARE DISCO TEST PRESSING VINYL LP 50 ONLY AUTOGRAPHED) was sold in October 2020 for £999.00 while the cheapest item (Charlie Schlatter Signed Photo - The Delinquents - Kylie Minogue movie - H231) found a new owner for £0.01 in August 2015. The month with the most items sold (614) was November 2020 with an average selling price of £29.52 for an autographed item of Kylie Minogue. Sold items reached their highest average selling price in April 2016 with £106.00 and the month that saw the lowest prices with £0.99 was August 2015. In average, an autographed item from Kylie Minogue is worth £25.00.

Most recently, these items with a signature of Kylie Minogue were sold on eBay - click here for more items.

Kylie Minogue wears bizarre pink and white asymmetrical dress that has left us l (04/11/15): We've long been of the opinion that Kylie Minogue could wear what ever she liked and still look fantastic. But the pint-sized star has now disproved this theory by stepping out in Brazil dressed as what can only be described as a Quality Street sweet.

Kylie Minogue looks unrecognisable after breathtaking transformation under wig a (04/09/15): Kylie Minogue has been totally transformed into a silent movie icon after donning a wig and heavy makeup for a photoshoot. Yes, that really is the I Should Be So Lucky singer, with her eyes done up and a short blonde hairpiece in place as she sits for a bizarre selfie.

Kylie Minogue talks about Angelina Jolie's decision to have her ovaries removed (04/04/15): The Australian singer famously battled cancer herself almost a decade ago.

Why Kylie Minogue has ruled out a return to Neighbours (04/04/15): But she reckons mechanic Charlene now owns a few garages around Queensland.

Sir Elton John's star-studded Oscars bash: Behind the scenes with Kylie Minogue (02/2015): Sir Elton John's huge Oscars viewing party was a success once again with a raft of A-listers helping to raise millions for his AIDS Foundation.

Back AGAIN! Kylie Minogue opts for double lace look to dine at the Chiltern Fire (01/2015): SHE is rumoured to be dating Chiltern Firehouse owner Andre Balazs, so it comes as no surprise that that was Kylie Minogue's venue of choice for the second time in as many days.

Kylie Minogue live at The O2 Arena, London - review (09/2014): The star's glamour, charisma and strong vocals made sure it didn't fall flat.

Kylie Minogue For Commonwealth Games Closing Ceremony (07/2014): Aussie star to close the show as games come to an end on Sunday...

Kylie Minogue Turning Her Back On Tv To Head Out On Tour (06/2014): Pop superstar Kylie Minogue is heading back out on tour following a short-lived stint as a Tv talent show judge. The Spinning Around hitmaker has announced she will hit the road with her Kiss Me Once shows, her first trek since 2011.

Neighbours: Kylie Minogue's 'son' surprises her on The One Show (05/2014): Tim Phillipps plays Scott and Charlene's son Daniel in Neighbours .

Kylie Minogue releases new B-side 'Sparks' - listen (04/2014): The singer releases the track with her new single 'Into The Blue'.

Kylie Minogue: Kiss Me Once – album stream (03/2014): Be among the first to hear the new album from Kylie, and let us know what you think … Guardian music

Kylie Minogue spins around and shows off her booty, while going for a glamorous (01/2014): The Voice mentor wears mini dress and stilettos to the gym - see the Instagram snap

Kylie Minogue And Will.i.am To Pull Double Duty On The Voice (11/2013): Kylie Minogue and will.i.am are to double their workload on Tv talent contest The Voice after signing up to join both the Australian and British...

After Andres Velencoso love split, is Kylie Minogue planning to adopt? (10/2013): She refuses to give up on her dream to be a mum

Kylie Minogue: Has 'The Voice' UK found its saviour? (09/2013): The Aussie pop minx is a popular appointment. But can she save the show?

Kylie Minogue to replace Jessie J on 'The Voice' UK? (08/2013): The Aussie singer may be in line to join the BBC One talent show as mentor.

VIDEO: Kylie Minogue opens her wardrobe (06/2013): Pop star Kylie Minogue is celebrating 25 years in the business with a new book looking back at the stage costumes and wardrobe choices that have featured in her public life.

A look at Kylie Minogue's most memorable looks as she turns 45 (05/2013): Kylie Minogue may have turned 45, but the pint-sized pop star is looking better than ever. ...