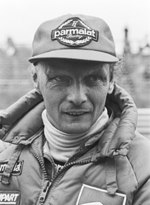 Andreas Nikolaus Lauda (22 February 1949 – 20 May 2019) was an Austrian Formula One driver and aviation entrepreneur. He was a three-time F1 World Drivers' Champion, winning in 1975, 1977 and 1984, and is the only driver in F1 history to have been champion for both Ferrari and McLaren, the sport's two most successful constructors. More about Niki Lauda

Current items with a signature of Niki Lauda

These are the most current items with a signature of Niki Lauda that were listed on eBay and on other online stores - click here for more items.

Traded items with a signature of Niki Lauda

The most expensive item with a signature of Niki Lauda (NIKI LAUDA 1975 SIGNED Autographed F1 HELMET Full Size 1/1 Scale DISPLAY EDITION) was sold in May 2019 for £3545.54 while the cheapest item (Niki Lauda Original Hand Signed AUTOGRAPH Formula One Grand Prix Driver) found a new owner for £0.99 in May 2019. The month with the most items sold (115) was May 2019 with an average selling price of £21.99 for an autographed item of Niki Lauda. Sold items reached their highest average selling price in November 2014 with £622.50 and the month that saw the lowest prices with £3.85 was November 2013. In average, an autographed item from Niki Lauda is worth £23.00.

Most recently, these items with a signature of Niki Lauda were sold on eBay - click here for more items.

F1 fans treated to rare sight of Mercedes coming to a halt and their chairman Ni (02/03/15): Nico Rosberg's Mercedes suffers issue during testing, but nothing as bad as their chairman who was caught going to the toilet

Niki Lauda’s first Formula 1 car roars into Richard House (11/27/14): Youngsters were able to get up close and personal with a piece of sporting history today as a car belonging to Formula 1 legend Niki Lauda showed up to deliver presents.

Jules Bianchi crash: Niki Lauda refuses to blame conditions for "very unfortunat (10/05/14): The 25-year-old Frenchman crashed into a recovery vehicle with nine laps to go in the rain-sodden race, but Lauda believes the accident was due to a combination of factors.

Niki Lauda Apologises For 'S*** Ferrari' Comment (07/25/14): Niki Lauda has apologised in person to all at Ferrari following his derogatory remarks made in the wake of Sunday's German Grand Prix. Mercedes non-executive chairman and three-times Formula One champion, with two of those titles won with Ferrari in 1975 and 1977, described the Maranello marque's cu

Niki Lauda issues apology to Ferrari after calling this year's car 's***' (07/2014): Niki Lauda has apologised in person to all at Ferrari following his derogatory remarks made in the wake of Sunday's German Grand Prix.

'We do not want do win all the races' - Niki Lauda fears Mercedes dominance bad (04/2014): Niki Lauda does not want his Mercedes team to win every race in Formula One this season.

Niki Lauda says he is confident Ross Brawn will return to Formula One after leav (12/2013): Three-time world champion says former Mercedes principal will return to F1 after he has had a break.

Niki Lauda desperately wants Ross Brawn to stay at Mercedes (10/2013): The future of Ross Brawn, Lewis Hamilton’s boss and one of grand prix racing’s most successful ever figures, was being fought over within his Mercedes team.

A Minute With: Daniel Bruhl on the 'Rush' of playing Niki Lauda (09/2013): By Mary Milliken LOS ANGELES (Reuters) - German actor Daniel Bruhl will be a fixture in U.S. movie theatres this fall with leading roles in two major releases - auto racing rivalry tale "Rush" and the WikiLeaks drama "The Fifth Estate." In director Ron Howard