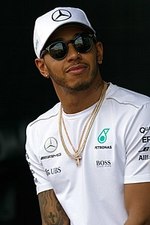 Sir Lewis Carl Davidson Hamilton MBE HonFREng (born 7 January 1985) is a British racing driver. He currently competes in Formula One for Mercedes, having previously driven for McLaren from 2007 to 2012. In Formula One, Hamilton has won a joint-record seven World Drivers' Championship titles (tied with Michael Schumacher), and holds the records for the most wins (98), pole positions (100), and podium finishes (171), amongst others. More about Lewis Hamilton

Current items with a signature of Lewis Hamilton

These are the most current items with a signature of Lewis Hamilton that were listed on eBay and on other online stores - click here for more items.

Traded items with a signature of Lewis Hamilton

The most expensive item with a signature of Lewis Hamilton (Official Bell, Signed Lewis Hamilton 1:1 2018 World Champion Helmet) was sold in March 2019 for £7200.00 while the cheapest item (6x4 - SignedLewis Hamilton.1 ,4 Times World Champion Celebration F1 Photograph) found a new owner for £0.30 in July 2018. The month with the most items sold (187) was March 2018 with an average selling price of £10.51 for an autographed item of Lewis Hamilton. Sold items reached their highest average selling price in April 2017 with £549.95 and the month that saw the lowest prices with £3.99 was October 2012. In average, an autographed item from Lewis Hamilton is worth £24.99.

Most recently, these items with a signature of Lewis Hamilton were sold on eBay - click here for more items.

Lewis Hamilton criticised for spraying hostess in the face with Champagne after (04/13/15): Lewis Hamilton may have eased to victory in the Chinese Grand Prix, but his antics on the podium were less impressive. The Brit popped the cork and sprayed Champagne, as is normal after victories in Grands Prix, but pointed the bottle directly at an unsuspecting hostess.

Lewis Hamilton insists Nico Rosberg was not trying to win in Shanghai as feuding (04/13/15): JONATHAN MCEVOY IN BAHRAIN: The morning after the row the night before, Lewis Hamilton and Nico Rosberg barely exchanged a word in the first-class cabin of their Emirates flight to Dubai.

Lewis Hamilton criticised for spraying hostess in the face with Champagne after (04/2015): Lewis Hamilton may have eased to victory in the Chinese Grand Prix, but his antics on the podium were less impressive. The Brit popped the cork and sprayed Champagne, as is normal after victories in Grands Prix, but pointed the bottle directly at an unsuspecting hostess.

F1: Lewis Hamilton fastest on penultimate day of 2015 testing in Barcelona (02/2015): For the second day running, the Mercedes AMG Petronas team topped the timesheets in Barcelona. Hamilton completed a total of 76 laps today (Saturday), recording the quickest time of day three of the final winter test with 1m 23.022s.

Nicole Scherzinger & Lewis Hamilton: Their on/off romance relived (12/2014): A look back at the ups and downs, splits and reunions of showbiz's answer to Ross & Rachel.

Lewis Hamilton continues Formula One title celebrations in Germany as the racer (11/2014): The breath of 40,000 worshipping Germans hung in the winter air. As did the plumes of purple-tinged grey smoke from Lewis Hamilton’s wheel-screeching, crowd-pleasing car.

Lewis Hamilton splits with media mogul Simon Fuller as title race hots up in Aus (10/2014): JONATHAN MCEVOY IN TEXAS: Lewis Hamilton, who joined Simon Fuller’s management stable to fulfil his dream cracking America, has decided to take control of his own management affairs.

It will be very difficult for Lewis Hamilton to beat Nico Rosberg in battle for (06/2014): PHIL DUNCAN: Lewis Hamilton faces an almost impossible task of winning this year’s World Championship, according to Murray Walker.

Top Gear Barbados! Lewis Hamilton to star in the Caribbean's first petrol-head f (02/2014): The Grand Prix star has confirmed he will be joining Jeremy Clarkson and his team as they descend on the Barbados in May for a host of crazy challenges.

Lewis Hamilton 'Saddened' By McLaren Deaths (01/2014): Formula One star Lewis Hamilton has said he is "deeply saddened" by the death of two McLaren workers in a sports car crash near the team's headquarters. The 2008 world champion, who drove for the team for six years, tweeted his condolences to their families, saying his "thoughts and prayers" were wi

Nicole Scherzinger set to start 2014 with a bang as she's 'rekindling romance' w (12/2013): The X Factor judge and Formula 1 driver 'to give things another go', we lose count of how many times we've heard that line

Lewis Hamilton not praising Ross Brawn is worse than Kimi Raikkonen missing in A (10/2013): Whereas Raikkonen is fed up of waiting for the £10million he is owned by his impecunious employers, how could Hamilton not speak effusively of Ross Brawn, his possibly outgoing team principal?

Nicole Scherzinger 'Breaks Down Over Lewis Hamilton Split' During X Factor Judge (09/2013): Sources Have Said That Nicole Was Emotional Throughout The Three Day Trip

Seven months of F1 growls from Lewis Hamilton's bulldog Roscoe - including what (08/2013): Every dog has his day – and if you’re Lewis Hamilton’s bulldog Roscoe you have a lot more besides. First, there’s the £20million bright red private jet, the £10million Monaco apartment and the 1.6 million adoring fans on Twitter.