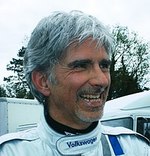 Damon Graham Devereux Hill, OBE (born 17 September 1960) is a British former racing driver from England. He is the son of Graham Hill, and, along with Nico Rosberg, one of only two sons of a Formula One world champion to also win the title. He started racing on motorbikes in 1981, and after minor success moved on to single-seater racing cars. Despite progressing steadily up the ranks to the International Formula 3000 championship by 1989, and despite being competitive, he never won a race at that level. More about Damon Hill

Current items with a signature of Damon Hill

These are the most current items with a signature of Damon Hill that were listed on eBay and on other online stores - click here for more items.

Traded items with a signature of Damon Hill

The most expensive item with a signature of Damon Hill (Signed Ayrton Senna and Damon Hill 1994 San Marino Grand Prix, Imola, poster.) was sold in July 2020 for £9000.00 while the cheapest item (Damon Hill Williams Renault Artists Proof Signed - Ross Wardle) found a new owner for £0.01 in January 2019. The month with the most items sold (20) was May 2020 with an average selling price of £24.50 for an autographed item of Damon Hill. Sold items reached their highest average selling price in October 2017 with £162.49 and the month that saw the lowest prices with £2.20 was May 2013. In average, an autographed item from Damon Hill is worth £19.00.

Most recently, these items with a signature of Damon Hill were sold on eBay - click here for more items.

Damon Hill predicts more misery for McLaren during the F1 season after being pla (03/08/15): Damon Hill fears McLaren will experience a painful start to the upcoming Formula One campaign. The British team arrive in Melbourne for this week's curtain raiser off the back of a troubled winter.

Dressage shock as Helen Langehanenberg loses ride on Damon Hill NRW (11/12/14): The top German duo have parted company after negotiations to extend the partnership until the 2016 Olympics failed

Damon Hill, Christian Horner and Max Chilton among guests at Formula One party (07/02/14): Racing drivers and celebrities joined forces to celebrate the official launch of the Formula One Santander British Grand Prix and raise money for a children’s charity.

Damon Hill joins cyclists on Halow Project charity ride (05/2014): Dozens of cyclists raised more than £76,000 for the Halow Project during the London-to-Guildford, via France, ride

Damon Hill gets on his bike to raise funds for Guildford charity (04/2014): The racing legend will be joining 84 fellow riders who are cycling a 250 mile route from London to Guildford, via France

Damon Hill on Raikkonen to Ferrari, Vettel’s dominance and all things F1 (09/2013): Damon Hill joined talkSPORT’s Andrew McKenna to talk all things Formula One. The 1996 world champion reacted to the news that Kimi Raikkonen is to join Ferrari and also gave his thoughts on Sebastien Vettel, as the German closes in a fourth successi

Damon Hill to step down as president of British Racing Drivers' Club (08/2013): • Former F1 world champion has spent five years in role • Hill wants to spend more time with his family Damon Hill is to step down as president of the British Racing Drivers' Club in August after five years in office. During his tenure Hill has helped Silverstone secure a 17-year deal to host Formul

BRITISH GRAND PRIX 2013: Damon Hill says Formula One blows people's minds (06/2013): Formula One, says Damon Hill, is the sport in which people find it the hardest to empathise with what the drivers are going through. 'It blows people’s minds,' he adds.

Ex-world champion Damon Hill warns Lewis Hamilton about enemy within ahead of to (05/2013): THE racing legend says Nico Rosberg is more of a threat than big guns Sebastian Vittel or Fernando Alonso.