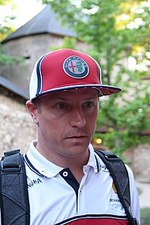 Kimi-Matias Räikkönen (born 17 October 1979), nicknamed "The Iceman", is a Finnish racing driver currently driving in Formula One for Alfa Romeo Racing, racing under the Finnish flag. Räikkönen won the 2007 Formula One World Championship driving for Scuderia Ferrari. In addition to this title, he also finished second overall in 2003 and 2005, and third in 2008, 2012 and 2018. With 103 podium finishes, he is one of only five drivers to have taken over 100 podiums. Räikkönen has won 21 Grands Prix, making him the most successful Finnish driver in terms of Formula One race wins, and is the only driver to win in the V10, V8 and the V6 turbo hybrid engine eras. After nine seasons racing in Formula One he left the sport to compete in the World Rally Championship in 2010 and 2011, returning to Formula One from 2012 onward. He is known for his reserved personality and reluctance to participate in PR events. At the 2020 Eifel Grand Prix, he broke the record for most starts in Formula One. More about Kimi Raikkonen

Current items with a signature of Kimi Raikkonen

These are the most current items with a signature of Kimi Raikkonen that were listed on eBay and on other online stores - click here for more items.

Traded items with a signature of Kimi Raikkonen

The most expensive item with a signature of Kimi Raikkonen (Kimi Räikkönen F1 2018 *SIGNED* Replica Helmet Full Scale UK Formula 1 Ferrari) was sold in for £6950.00 while the cheapest item (kimi raikkonen Signed 2020 alfa romeo F1 t-shirt) found a new owner for £0.01 in March 2021. The month with the most items sold (92) was March 2018 with an average selling price of £5.50 for an autographed item of Kimi Raikkonen. Sold items reached their highest average selling price in August 2017 with £219.99 and the month that saw the lowest prices with £0.99 was February 2013. In average, an autographed item from Kimi Raikkonen is worth £19.00.

Most recently, these items with a signature of Kimi Raikkonen were sold on eBay - click here for more items.

Kimi Raikkonen: Ferrari can win the F1 title this season... we are improving all (04/13/15): Kimi Raikkonen sees no reason why Ferrari cannot win this year's F1 world title race. Following a torrid campaign with the team in 2014, Raikkonen finally has a car to his liking at Ferrari this season.

The First Time - with Ferrari's Kimi Raikkonen (12/05/14): 2014 has been a year of firsts for Kimi Raikkonen, and not all of them wanted - his return to Ferrari marked his first winless Formula One season since 2006, and his first without a podium since his maiden year in 2001.

Kimi Raikkonen Q&A: It’s just been a bad season (11/06/14): Kimi Raikkonen’s return to Ferrari for 2014 was meant to be his ticket back to the bigtime. It hasn’t quite panned out that way. Raikkonen has yet to see the podium, has been out-scored by his team mate three to one, and languishes a lowly 12th in the driver standings.

Kimi Raikkonen '100 per cent sure' rejoining Ferrari was the right decision desp (11/01/14): Kimi Raikkonen has scored just 47 points from the 16 races ahead of this weekend's US Grand Prix, compared to team-mate Fernando Alonso's total of 141.

Kimi Raikkonen calls on changes at Ferrari after qualifying error leaves him low (07/2014): Kimi Raikkonen has urged Ferrari to cure their 'weaknesses in the system' after a qualifying gaffe left him fighting an uphill battle in Sunday's Hungarian Grand Prix.

Back in red! Kimi Raikkonen starts first week after returning to Ferrari (01/2014): Kimi Raikkonen was back in Ferrari colours this week for the first time since his acrimonious split from the Italian outfit. The Finn parted company with Ferrari at the end of the 2009 season after the Maranello team bought him out of the remainder of his contract.

F1: Kimi Raikkonen opts for back surgery over Lotus farewell (11/2013): Kimi Raikkonen will miss the last two races of the Formula One season in the US and Brazil after deciding to have back surgery next week. Steve Robertson, Raikkonen’s manager, said the 2007 world champion, who is moving to Ferrari next season, could no longer put off the operation.

Kimi Raikkonen fails to turn up at Abu Dhabi Grand Prix (10/2013): Kimi Raikkonen was conspicuous by his absence in Abu Dhabi on Thursday in the wake of the foul-mouthed fall out between the Finn and his Lotus team during last weekend's Indian Grand Prix.

Murray Walker exclusive interview: Kimi Raikkonen return to Ferrari could be a ' (09/2013): Ranging from his expectations for the 2014 season, how Sebastian Vettel compares to the greats and his thoughts on Kimi Raikonnen returning to Ferrari - legendary F1 commentator Murray Walker answers

McLaren hint at Kimi Raikkonen bid (08/2013): The McLaren team principal Martin Whitmarsh, has hinted he may yet make a move for Kimi Raikkonen after failing to sign him last year.

Kimi Raikkonen benefits from F1 U-turn over James Hunt tribute helmet (05/2013): • Rear-facing message originally deemed to breach TV rules • Bernie Ecclestone steps in following initial cover-up Kimi Raikkonen has been cleared to race with a tribute on his helmet to the late James Hunt after the lettering was initially deemed to con