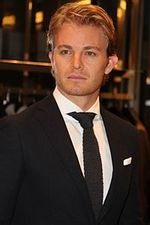 Nico Erik Rosberg (born 27 June 1985) is a German-Finnish former racing driver who won the 2016 Formula One World Championship driving for Mercedes-AMG Petronas Motorsport. The only child of Keke Rosberg (the 1982 F1 World Champion) and his German wife Sina Rosberg, he was raised primarily in the Principality of Monaco. More about Nico Rosberg

Current items with a signature of Nico Rosberg

These are the most current items with a signature of Nico Rosberg that were listed on eBay and on other online stores - click here for more items.

Traded items with a signature of Nico Rosberg

The most expensive item with a signature of Nico Rosberg (Nico Rosberg Signed Race Suit, Formula One, Motor Racing, F1, Formula 1) was sold in June 2020 for £1995.00 while the cheapest item (SIGNED PICTURE OF NICO ROSBERG WILLIAMS F1 - ORIGINAL AUTHENTIC) found a new owner for £0.06 in March 2016. The month with the most items sold (44) was May 2018 with an average selling price of £10.25 for an autographed item of Nico Rosberg. Sold items reached their highest average selling price in February 2016 with £712.49 and the month that saw the lowest prices with £0.99 was October 2014. In average, an autographed item from Nico Rosberg is worth £15.00.

Most recently, these items with a signature of Nico Rosberg were sold on eBay - click here for more items.

No sweat as Nico Rosberg aims for head start (03/26/15): Formula One’s toughest race of the year on Sunday will be no sweat for Nico Rosberg – thanks to the use of a sanitary towel as a headband.

Banker cleared of stealing Nico Rosberg F1 replica steering wheel from Mercedes- (02/2015): A 48-year-old man admitted taking the item but said he believed he had been given permission and just "wanted to help Mercedes-Benz World"

OPINION: Not so tense, but just as pleasing – justice for Nico Rosberg and well (12/2014): The Abu Dhabi Grand Prix could have been a huge climax to the 2014 Formula One season – and it was not necessarily the race we hoped for, but ultimately it was the result everyone wanted.

Nico Rosberg Q&A: I'm in agony after retirement (09/2014): Q: Nico, what a setback for your title hopes. When did the problems start? Nico Rosberg: Already in the pits.

Mercedes warn Nico Rosberg over his future conduct after German apologises for ' (08/2014): Mercedes say they have found a "suitable punishment" for Nico Rosberg after he apologises to Lewis Hamilton for crashing into him

Nico Rosberg Q&A: Sometimes the odds are against you (07/2014): Mercedes’ Nico Rosberg held a commanding lead in Sunday’s race at the Hungaroring until Marcus Ericsson crashed his Caterham and brought out the safety car. At that point, the German’s race turned on its head.

NICO ROSBERG: I didn't realise I finished second in Canada until AFTER the race. (06/2014): The Canadian Grand Prix was completely all over the place with so many things happening. We had a KERS failure which was huge. The team thought that a problem of this kind would not allow us to finish the race because it affected both my brakes and the fuel.

Nico Rosberg Q&A: Bahrain heat has uncovered weaknesses (02/2014): Mercedes’ Nico Rosberg emerged with the fastest time at last week’s test in Bahrain, leading many to single him out as strong contender for the 2014 title.

Exclusive Nico Rosberg Q&A: New cars a real challenge (01/2014): Whilst some of their rivals have stuttered, Mercedes have enjoyed a positive week of testing in Jerez with both Nico Rosberg and Lewis Hamilton racking up plenty of mileage behind the wheel of the new turbo-powered F1 W05.

Nico Rosberg Suffers High Speed F1 Tyre Test Blow-Out (12/2013): Pirelli's tyre test in Bahrain has been marred by a tyre blow-out, according to a tweet from Mercedes driver Nico Rosberg. The Italian company are to continue as Formula One's tyre supplier during the 2014 season and Red Bull, Ferrari, Mercedes and Toro Rosso have all taken part in a three-day test

Exclusive Nico Rosberg Q&A: Constructors' fight will be tough (10/2013): With two wins and three pole positions to his credit so far in 2013, there’s no doubt that Mercedes’ Nico Rosberg is enjoying the best season of his career.

Nico Rosberg Q&A: Mercedes up for the street fight (09/2013): Mercedes' Nico Rosberg has had a good weekend in Singapore so far, and believes a good result could be possible in Sunday's race. A good start and a clever strategy will be crucial, as will a bit of 'street fighting' spirit...

Nico Rosberg Q&A: Race will be a red-hot battle (07/2013): Nico Rosberg looked to be in the running for pole position when qualifying got underway on Saturday, but by the end of the session he could only manage fourth on the grid.