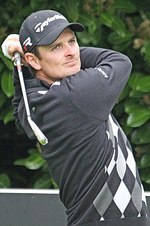 Justin Peter Rose, MBE (born 30 July 1980) is an English professional golfer who plays most of his golf on the PGA Tour, while keeping his membership on the European Tour. He won his first major championship at the 2013 U.S. Open at Merion Golf Club, becoming the first English player to win a major since Nick Faldo in 1996 and the first to win the U.S. Open since Tony Jacklin in 1970. At the 2016 Summer Olympics in Rio de Janeiro, Rose won gold at the men's individual tournament. With that victory, Rose joined Hall of Fame members Gary Player, David Graham, Hale Irwin and Bernhard Langer as one of only five golfers to win official tournaments on all six continents on which golf is played. Rose has also twice been runner-up at the Masters Tournament, in 2015 and 2017. More about Justin Rose

The most expensive item with a signature of Justin Rose (Justin ROSE SIGNED AFTAL Autograph COA Golf 2013 US PGA Merion Flag Winner RARE) was sold on eBay in July 2020 for £399.99 while the cheapest item (Justin Rose - signed paper) found a new owner for £0.75 in July 2018. The month with the most items sold (8) was October 2018 with an average selling price of £32.48 for an autographed item of Justin Rose. Sold items reached their highest average selling price in July 2020 with £399.99 and the month that saw the lowest prices with £0.99 was January 2013. In average, an autographed item from Justin Rose is worth £20.00.

Current items with a signature of Justin Rose

These are the most current items with a signature of Justin Rose that were listed on eBay and on other online stores - click here for more items.

Traded items with a signature of Justin Rose

Most recently, these items with a signature of Justin Rose were sold on eBay - click here for more items.

Former Masters champion Reed sees bigger picture by supporting the European Tour (10/07/20): The unequivocal backing of American Reed and Justin Rose's impending relocation to London added up to a welcome day of good news for the European Tour on the eve of the PGA Championship.

There have been just two English wins in last 96 majors but there is chance at U (09/16/20): When Justin Rose lifted the US Open trophy following a memorable final round at Merion in 2013, it appeared not only a personal triumph but an inspirational one for English golf.

Justin Rose makes an electrifying return to golf as PGA Tour returns without fan (06/11/20): DEREK LAWRENSON: On the day that golf led America's major sports out of the lockdown, it seemed entirely appropriate that the early pacemaker on Thursday should be a man called Rose.

Justin Rose's old caddie Mark Fulcher on road to recovery with Frankie Molinari (02/2020): DEREK LAWRENSON - WORLD OF GOLF: The walk from the 18th to the Riviera clubhouse involves negotiating a formidable incline for a man in good health, let alone one just back from heart surgery.

Tommy Fleetwood ramps up mind games ahead of Dubai showdown with Bernd Wiesberge (11/2019): DEREK LAWRENSON IN DUBAI: Two years ago, the Englishman put in a jittery performance when he was the frontrunner and was almost caught by Justin Rose

Justin Rose disappears at The Open after horror shank at ninth (07/2019): JONATHAN MCEVOY AT PORTRUSH: The drenched course was making an amateur hacker out of the millionaire Englishman even before his nightmare at the ninth.

The Masters 2015: Justin Rose hoping for something special in bid to overturn Jo (04/2015): Justin Rose is gunning for Texan Jordan Spieth when he plays in the group behind the Masters leader in today's third round. The American star shot a new Masters record of 14-under par at the halfway mark to lead Charley Hoffman by five shots.

Swing sequence: Justin Rose (02/2015): Wentworth's head of instruction Kristian Baker takes a closer look at the swing that won Justin Rose the US Open at Merion in 2013. 1. A perfect posture to start the swing. Balanced, with his weight at the front of his ankles and his arms hanging down relaxed from his shoulders.

Bradley Neil has hopes of sampling the famous Augusta National with Justin Rose (01/2015): The British Amateur champion is off to the USA for a taste of Augusta as he prepares for the main event in April

VIDEO: Golf star Justin Rose at Goodwood (12/2014): It’s day four of 14 in our look back at local sport highlights of 2014 – and this time it’s a great day for golfers that we recall in the video above.

Justin Rose proves himself Europe's talisman after finishing unbeaten and as top (09/2014): Englishman modestly praises main partner Henrik Stenson but ends up with a personal haul of three wins and two halves from five matches

Justin Rose fires a 67 to climb leaderboard as Brits make good start in third ro (08/2014): Justin Rose shot his lowest round of the week at the USPGA Championship on Saturday — but was left to rue late mistakes.

Rory McIlroy celebrates Open win with rumoured new girlfriend Nadia Forde and mu (07/2014): Rory McIlroy took to the streets of Liverpool on Sunday night to celebrate his Open victory. The 25-year-old won the Claret Jug at Hoylake in the afternoon, before being seen out a few hours later with his mum, Justin Rose and rumoured new girlfriend Nadia Fo

Red-hot Justin Rose conquers again in America - and offers hope on home soil (06/2014): DEREK LAWRENSON: When it comes to golfing achievements, there’s no better company to keep than Tiger Woods and Sir Nick Faldo, and Justin Rose found himself linked with both following his gutsy play-off success in the PGA

Justin Rose plans to follow same script in US Open title defence - and that mean (05/2014): Justin Rose will leave his children at home when he defends his US Open title at Pinehurst because it worked last year. James Corrigan reports

Justin Rose fighting fit for the Masters after recovering from shoulder injury (03/2014): Englishman has recovered from tendinitis in shoulder which ruled him out of all but two events this season

Volvo Champions 2014: Justin Rose to take three-month break to recover for The M (01/2014): US Open champion to take off three months golf to recover from tendinitis and prepare for The Masters, while Tommy Fleetwood leads the way in the Volvo Champions

Wimbledon champion Andy Murray, US Open winner Justin Rose, Tour de France title (11/2013): Police in Norwich have released CCTV images of a woman they want to speak to after a purse theft in the city centre.

Justin Rose tees up £7m meal for hungry kids at PGA TOUR Championship at East La (09/2013): Justin Rose has already decided what he will do if he collects a cheque for $11.44 million at the Tour Championship on Sunday. He will give much of it away to charity.

Adam Scott holds off late challenge from Tiger Woods and Justin Rose to claim Ba (08/2013): Adam Scott hung on for victory by one shot at The Barclays in Jersey City as Gary Woodland missed a birdie putt on the 18th hole to take it into a play-off.