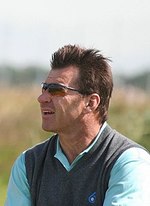 Sir Nicholas Alexander Faldo, MBE (born 18 July 1957) is an English professional golfer who is now mainly an on-air golf analyst. A top player of his era, renowned for his dedication to the game, he was ranked No. 1 on the Official World Golf Ranking for a total of 97 weeks. His 41 professional wins include 30 victories on the European Tour and six major championships: three Open Championships (1987, 1990, 1992) and three Masters (1989, 1990, 1996). More about Nick Faldo

The most expensive item with a signature of Nick Faldo (OPEN 2015 FLAG SIGNED BY 6 PAST CHAMPIONS INC TOM WATSON & NICK FALDO) was sold on eBay in October 2019 for £1995.00 while the cheapest item (Nick Faldo signed photo) found a new owner for £0.50 in September 2018. The month with the most items sold (7) was October 2020 with an average selling price of £28.00 for an autographed item of Nick Faldo. Sold items reached their highest average selling price in May 2015 with £89.99 and the month that saw the lowest prices with £0.99 was August 2015. In average, an autographed item from Nick Faldo is worth £15.00.

Current items with a signature of Nick Faldo

These are the most current items with a signature of Nick Faldo that were listed on eBay and on other online stores - click here for more items.

Traded items with a signature of Nick Faldo

Most recently, these items with a signature of Nick Faldo were sold on eBay - click here for more items.

After just TWO wins since 1996 can an English star finally end major hoodoo? (11/08/20): There have been 97 majors since Sir Nick Faldo claimed his sixth Masters title -and English golfers have claimed just two of them. Sportsmail look at the prospects of an English win at Augusta.

Sir Nick Faldo on his second claiming of the green jacket at Augusta 30 years ag (04/07/20): EXC INTERVIEW BY DEREK LAWRENSON: If you had to rank Sir Nick Faldo's six major championship wins, his successful defence of his Masters title 30 years ago might well finish bottom.

Nick Faldo has lost the respect of Europe's golfers, says Ryder Cup star Ian Pou (10/19/14): POULTER has taken aim at the former Ryder Cup captain in his autobiography, which has been released this week.

Ryder Cup 2014: Paul McGinley and Rory McIlroy heed the lessons of Sir Nick Fald (08/2014): Europe captain has a different outlook to the man whose approach was so costly after last Open-US?PGA double

Golf great Nick Faldo reveals his Scottish Open ambition.. to find the best fish (06/2014): FALDO will tee up at Royal Aberdeen for his first Scottish Open since 2002 as he looks to blow away the cobwebs ahead of The Open and satisfy his craving for a good chippie.. so we've lent a helping hand with five of the best.