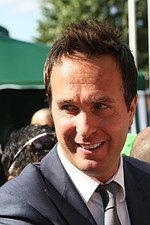 Michael Paul Vaughan OBE (born 29 October 1974) is an English cricket commentator and former cricketer who played all forms of the game. He served as England captain for the test team from 2003 to 2008, the one-day international team from 2003–2007, and was the first Twenty20 England captain from 2005–2007. He represented Yorkshire in the domestic arena. More about Michael Vaughan

Current items with a signature of Michael Vaughan

These are the most current items with a signature of Michael Vaughan that were listed on eBay and on other online stores - click here for more items.

Traded items with a signature of Michael Vaughan

The most expensive item with a signature of Michael Vaughan (Michael Vaughan Signed Framed England Cricket Shirt) was sold in for £500.00 while the cheapest item (MICHAEL VAUGHAN - ENGLAND - GENUINE SIGNED PHOTO) found a new owner for £0.80 in January 2020. The month with the most items sold (9) was July 2013 with an average selling price of £23.99 for an autographed item of Michael Vaughan. Sold items reached their highest average selling price in November 2020 with £139.99 and the month that saw the lowest prices with £0.99 was September 2016. In average, an autographed item from Michael Vaughan is worth £8.49.

Most recently, these items with a signature of Michael Vaughan were sold on eBay - click here for more items.

Michael Vaughan: My cricket awards for 2014 (12/2014): Michael Vaughan looks back at the year and picks his man, team, world and England players of 2014 as well as an old friend selection for the gaffe gong

Arsenal, Stuart Broad, and Michael Vaughan join fans in #putoutyourbats Phillip (11/2014): Sports stars, celebrities and cricket fans all around the world have united in a touching tribute to Phillip Hughes. Hundreds have placed a bat and cricket cap by their front door as a mark of respect.

Alastair Cook is a stubborn man and must be sacked as England ODI captain before (09/2014): Michael Vaughan is calling on England to be ruthless by sacking captain Alastair Cook in order to salvage any chance of winning next year's World Cup.

England v India: Time for hosts' old guard to stand up and be counted, says Mich (07/2014): Michael Vaughan: Each player in England's team needs some home truths spelt out before must-win Test

A preview of all Friday's action in the T20 Blast including Michael Vaughan's st (05/2014): Surrey will miss Kevin Pietersen against Middlesex, for whom Dawid Malan is putting himself back into England contention

England captain Stuart Broad must now tackle the Jade Dernbach dilemma, says Mic (03/2014): Bowler is misused when being given the new ball, but jury is still out as to his ability, writes Michael Vaughan

Ashes 2013: England team have the qualities to dominate their era, says Michael (07/2013): Michael Vaughan: Alastair Cook's men have everything in their armoury to climb back up to the top of the Test world rankings.

The Ashes 2013: Darren Lehmann's appointment makes England's task much harder, s (06/2013): Joe Root decision was not a shock, but the surprise move to appoint Darren Lehmann will improve Australia hugely.

Creaky knees? Take the simple step that saved Strictly star Michael Vaughan (05/2013): It’s surprising to learn that Michael, 38, has suffered from painful, stiff knees since his teens, and until recently some activities were beyond him.