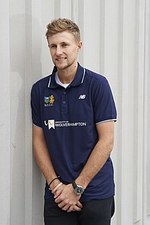 Joseph Edward Root, MBE (born 30 December 1990) is an English cricketer who plays for the England Test and One Day International (ODI) teams, and formerly captained the Test team. He also represents Yorkshire in English domestic cricket. More about Joe Root

Current items with a signature of Joe Root

These are the most current items with a signature of Joe Root that were listed on eBay and on other online stores - click here for more items.

Traded items with a signature of Joe Root

The most expensive item with a signature of Joe Root (Joe Root signed England shirt and cap West Indies series 2020 match worn) was sold in August 2021 for £750.00 while the cheapest item (Joe Root Genuine Hand Signed 12x8 Photo With Exact Proof) found a new owner for £0.06 in September 2013. The month with the most items sold (23) was July 2019 with an average selling price of £9.99 for an autographed item of Joe Root. Sold items reached their highest average selling price in June 2017 with £199.99 and the month that saw the lowest prices with £1.94 was June 2018. In average, an autographed item from Joe Root is worth £13.45.

Most recently, these items with a signature of Joe Root were sold on eBay - click here for more items.

Jason Gillespie: Joe Root is ready to lead England … he would embrace it (04/01/15): Yorkshire’s head coach has helped six of his County Championship-winning side into the England squad and will begin the title defence seriously down on numbers but Gillespie chooses to look at the positives • Mum’s tears have Adam Lyth crying over England call to tour West Indies “Part of our job is

England's World Cup 2015 player ratings: Joe Root impressed but Gary Ballance fl (03/09/15): England crashed out of the 2015 Cricket World Cup in dramatic circumstances on Monday losing to Bangladesh by 15 runs after they were bowled out.

England’s Joe Root ‘unconcerned’ after David Warner fined for remark (01/2015): I’m more concerned about English cricket, says Joe Root after comments by the Australia opener David Warner in spat with India’s Rohit Sharma • Martin Crowe: Warner’s thuggish behaviour has gone too far The decision to put Joe Root up for interview on the morning David Warner was again top of the ne

Joe Root the star for England but captain Alastair Cook's struggles with the bat (12/2014): England were defeated 5-2 by Sri Lanka in the seven-match one-day series and, in truth, very few players have done their World Cup chances much good. Here, Sportsmail rates the touring players...

England can spring a surprise and win the World Cup, insists star batsman Joe Ro (11/2014): Joe Root has a knack for niggle when it comes to Sri Lanka but is focusing only on upsetting the odds when it comes to England’s one-day future.

Winter full of promise insists Joe Root (10/2014): JOE ROOT is confident England can defy their critics and be contenders for this winter’s one-day World Cup in Australia and New Zealand.

Moeen Ali and Joe Root turn it on as England inch closer to victory over India (07/2014): PAUL NEWMAN AT THE AGEAS BOWL: England are perfectly placed to end close to a year of abject misery by finishing off a job they have started with four highly impressive days and level this Investec series with victory in the third Test.

England v Sri Lanka: Joe Root and Matt Prior have looked good, but Alastair Cook (06/2014): Michael Vaughan: England must learn to show more aggression if they are to hope to regularly take 20 wickets in a Test

Joe Root desperate to avoid more England agony (05/2014): Joe Root has said England's much-vaunted attempt to rebuild their standing with their fans, let alone the rest of the cricket world, will come to nothing if they suffer yet more humiliation during the ongoing one-day series with Sri Lanka.

Joe Root 'proud' of Yorkshire captaincy honour at Lord's (04/2014): JOE ROOT admitted it had been “a proud moment and a real honour” to be chosen to captain Yorkshire when regular skipper Andrew Gale stood down from the side to play Middlesex at Lord’s.

Australia v England: torrid tour puts a sudden detour in Joe Root's smooth route (01/2014): Joe Root in danger of being dropped from the 50-over team within a fortnight of losing his Test place.

Joe Root is mature enough to replace Jonathan Trott at No3, insists coach Andy F (11/2013): Andy Flower today backed Joe Root to be a success if he replaces Jonathan Trott as England’s No3 following the batsman’s departure from Australia with a stress-related illness.

The Ashes: Joe Root accepts top order must improve (10/2013): Joe Root yesterday accepted that England’s top order must do better if they are to retain the Ashes — but whether he remains part of that unit when their defence begins at Brisbane next month is open to question.

Joe Root's in the wars but England star still ready to fight the Aussies (08/2013): Joe Root was nursing a fat lip and struggling to talk but England expect him to play on Saturday in a Twenty20 game against Australia.