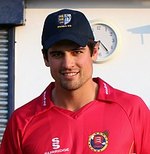 Sir Alastair Nathan Cook CBE (born 25 December 1984) is an English cricketer who plays for Essex County Cricket Club, and played for England in all international formats from 2006 to 2018. A former captain of the England Test and One-Day International (ODI) teams, he is the fifth-highest Test run scorer of all time and holds a number of English and international records. More about Alastair Cook

Current items with a signature of Alastair Cook

These are the most current items with a signature of Alastair Cook that were listed on eBay and on other online stores - click here for more items.

Traded items with a signature of Alastair Cook

The most expensive item with a signature of Alastair Cook (Official signed Alastair Cook cricket shirt worn England v South Africa 2017) was sold in August 2017 for £701.00 while the cheapest item (Alastair Cook - England - Nicely Signed Card) found a new owner for £0.99 in February 2022. The month with the most items sold (32) was September 2018 with an average selling price of £11.74 for an autographed item of Alastair Cook. Sold items reached their highest average selling price in August 2017 with £701.00 and the month that saw the lowest prices with £0.99 was February 2013. In average, an autographed item from Alastair Cook is worth £13.16.

Most recently, these items with a signature of Alastair Cook were sold on eBay - click here for more items.

Man on a Mission: Alastair Cook is back with a point to prove (04/09/15): “I’m a massive Alastair Cook fan,” says Andrew Flintoff in his familiar, Lancashire tones. “If my daughter brought Alastair Cook home, I would high-five the missus! He’s just one of the best blokes you could ever wish to meet.”

Alastair Cook and Jonathan Trott put England on course for easy warm-up win in W (04/06/15): England's tour of the West Indies began with the gentlest possible examination as they dominated day one of their warm-up match at Warner Park. They dismissed a compliant St Kitts & Nevis Invitational XI for just 59 in the morning session before captain Alastair Cook and the returning Jonathan Trott

Alastair Cook 'refreshed' and ready to restore England's damaged reputation in W (04/05/15): Alastair Cook insists he is 'refreshed' by this winter's enforced sabbatical at home on the farm. A beleaguered England will hope he is feeling the benefits ahead of the West Indies tour

Alastair Cook accepts only a series win will suffice against West Indies (04/04/15): England’s abysmal showing in the World Cup has put even more pressure on Peter Moores and his team to ensure a victorious tour of the Caribbean • Cook uncertain if Trott can handle Test return It is perhaps apt England begin their tour of the West Indies in close proximity to the setting of Death in

Yorkshire promise tough test for Alastair Cook (02/2015): JASON GILLESPIE has assured England fans that Alastair Cook will be given the toughest possible workout when Yorkshire face the opening batsman in Abu Dhabi next month.

Alastair Cook named in MCC squad for season opener against Yorkshire (01/2015): But Cook will not skipper the side in Abu Dhabi, with that honour instead falling to his former international team-mate Nick Compton.

Alastair Cook frustrated at missing Cricket World Cup but aims for quick recover (12/2014): Alastair Cook admitted he is disappointed not to be going to the World Cup in February after being stripped of England's one-day captaincy.

Moeen Ali interview: The England star on backing Alastair Cook, boos in Birmingh (10/2014): Kevin Pieterson sparked a game of claim and counterclaim with his explosive revelations in that book last week.

Alex Hales living the dream as England's one-day opener and he defends Alastair (08/2014): Alex Hales wants to show he deserves a place at the top table by forming a 50-over opening partnership with Alastair Cook that can prove England are not stuck in the dark ages in one-day cricket.

STUART BROAD: Alastair Cook has the full support of the England team (06/2014): Of course Alastair Cook will feel a bit of pressure at the moment because there are people on the outside trying to apply it to him, but let me assure you every person in that England dressing room knows he is one of our ‘gun’ batsmen and our leader to take us forward.

Alastair Cook peeved at David Warner reprieve but knows he needs runs (04/2014): • 'I thought it was a clean catch,' England captain says • 'I need to start scoring runs to help turn things around' Having been beaten soundly and repeatedly in both Test and now one-day cricket across this Australian summer, Alastair Cook at least had the luxury of being able to point to a poor um

Alastair Cook back at the crease for Essex (02/2014): Alastair Cook will bat for the first time since England’s nightmare winter tour when he joins his Essex team-mates for pre-season practice tomorrow.

The Ashes: Alastair Cook desperate to avoid whitewash in Australia (12/2013): • England captain admits team's confidence has been hit • 'When you win games it papers over some of the cracks' Alastair Cook has a pressing Christmas wish: to stop Australia's quest for another Ashes whitewash, in the Boxing Day Test. Cook has played in two previous Melbourne Tests, in entirely co

Alastair Cook wants 'big runs' from low-scoring England (10/2013): England captain Alastair Cook has said "big runs" are the order of the day if they are to win a fourth successive Ashes during the upcoming series in Australia.

Ashes 2013: Alastair Cook's goatee, sneaky ciggies and Sean Bean 'twin' | Emma J (09/2013): A view from the armchair of what Ian Botham has called a 'boring' series between England and Australia It was understandable, as the rain pelted down on an empty ground, that we would all feel a bit ungenerous towards the Ashes. Poor Ashes. We put so much p

England's Alastair Cook and Joe Root must pull apart to prosper together | Vic M (08/2013): The supposed dream team opening partnership are too similar in style to strike fear into Australia's attack It hardly constitutes a triumph but at the ninth time of asking England's latest opening pair, the dream team of Alastair Cook and Joe Root, delivered