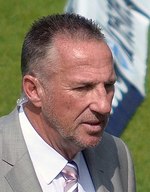 Ian Terence Botham, Baron Botham, OBE (born 24 November 1955) is an English cricket commentator, member of the House of Lords and a former cricketer who has been chairman of Durham County Cricket Club since 2017. More about Ian Botham

Current items with a signature of Ian Botham

These are the most current items with a signature of Ian Botham that were listed on eBay and on other online stores - click here for more items.

Traded items with a signature of Ian Botham

The most expensive item with a signature of Ian Botham (Signed Ian Botham Photo Display - England Cricket Icon +COA) was sold in September 2020 for £279.99 while the cheapest item (Ian Botham - Hand Signed Photograph) found a new owner for £0.95 in May 2020. The month with the most items sold (20) was April 2020 with an average selling price of £9.99 for an autographed item of Ian Botham. Sold items reached their highest average selling price in September 2017 with £199.99 and the month that saw the lowest prices with £3.99 was October 2019. In average, an autographed item from Ian Botham is worth £10.00.

Most recently, these items with a signature of Ian Botham were sold on eBay - click here for more items.

It is time to put Ian Botham on a pedestal (12/29/14): Simon Briggs: Sports stars, if only male ones, have taken politicians' places on our plinths, but Britain's greatest sportsman of the Eighties is due recognition

MoS readers' fury at the RSPB after Ian Botham blast (11/08/14): Sir Ian Botham’s attack on the leadership of the RSPB after the charity blocked a plan to protect hen harriers drew a massive response from Mail on Sunday readers.

Sir Ian Botham blasts RSPB over 'spending quarter of cash on saving birds' (10/2014): A group of landowners led by former cricketer Sir Ian Botham has accused Britain’s biggest nature charity, the Royal Society for the Protection of Birds, of misleading donors over how it spends its money.

Andrew Flintoff: I took pedalo to have a drink with Ian Botham during 2007 Crick (09/2014): Former England all-rounder tells the true story for his infamous drunken jaunt on a pedalo in the Caribbean, seven years after the event

The Week In 50 Funny Tweets: Starring GCSE Results, Julian Assange And, Yes, Ian (08/2014): It was a week of joy and heartache. For those receiving their GCSE results : So proud of Bobby this morning! He's passed all of his GCSEs! He got BAA BAA BAA #gcseresults pic.twitter.com/QvmwtVw3Ef — Weird Horse (@WeirdHorse) August 21, 2014 For Julian Assange : Julian Assange finally leaving the Ec

Jos Buttler at 16 had even more talent than England legend Ian Botham, says scho (07/2014): Jos Buttler was 14 when he discovered he had not quite got to the pitch of the ball in a first XI game for King’s College Taunton against West Country rivals Blundell’s School. But he didn’t panic.

Why DO so many children abandon their parents in their darkest hour? I'm stunned (05/2014): I'm fairly sure my father had absolutely no idea who I was before he died, writes REBECCA LEY. But it didn't dawn on me, even for a second, not to be by his side.

England don't have a new Ian Botham, they have the first Ben Stokes | Mike Selve (04/2014): The young all-rounder's first Test hundred could define his career and shape the future of the England team For Ben Stokes the comparisons will be inevitable. It goes with the territory. Even before Ian Botham was playing, it seems, they were looking for the next Ian Botham. His Beefiness himself wa

Opening of research centre by Sir Ian Botham is a "milestone" for NHS trust (03/2014): SIR Ian Botham today officially opened Darlington Memorial Hospital’s first clinical research unit which has been hailed as an important milestone for the County Durham and Darlington Trust.

'As talented as Ian Botham' (01/2014): Graham Stevenson, the former Yorkshire and England allrounder, was recognised as a cricketer of enormous natural talent. "As good as Botham," Yorkshire observers were particularly inclined to claim.

The Ashes: Ian Botham and Geoffrey Boycott slam England's batting at the Gabba (11/2013): LAWRENCE BOOTH AT THE GABBA: England's batting collapse on day two of the first Ashes Test has led some of the country's cricketing legends to speak out against the side.

Ian Botham: Live Q&A with the cricket legend (08/2013): Following on from a successful Ashes Series win, Sir Ian Botham joins us for a live and interactive webTV show from 1pm

Ashes 2013: Bob Willis hails James Anderson and backs him to go past Ian Botham (07/2013): It was only two months ago that Bob Willis made a 40-mile journey to Lord's from a funeral he had just attended to congratulate Jimmy Anderson on joining English cricket's very exclusive 300 Club.

Sir Ian Botham affair: Ex-mistress Kylie Verrells hits back over his claim that (06/2013): The Sunday People can reveal that Sir Ian Botham’s ex-mistress has hit back in fury after his version of the affair came out in a TV interview.

Sir Ian Botham: The runs will come for Kevin Pietersen (05/2013): Sir Ian Botham is in bullish mood as English cricket gets ready for a double Ashes year which he hopes will feature one of the ‘best players of all time’.