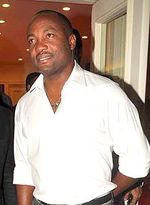 Brian Charles Lara, TC, OCC, AM (born 2 May 1969) is a Trinidadian former international cricketer, widely acknowledged as one of the greatest batsmen of all time. He topped the Test batting rankings on several occasions and holds several cricketing records, including the record for the highest individual score in first-class cricket, with 501 not out for Warwickshire against Durham at Edgbaston in 1994, which is the only quintuple-hundred in first-class cricket history. More about Brian Lara

Current items with a signature of Brian Lara

These are the most current items with a signature of Brian Lara that were listed on eBay and on other online stores - click here for more items.

Traded items with a signature of Brian Lara

The most expensive item with a signature of Brian Lara (BRIAN LARA SIGNED MRF FULL SIZE WORLD TEST RECORD 400 CRICKET BAT + PHOTO PROOF) was sold in March 2018 for £799.99 while the cheapest item (A fantastic 12x8 Autographed Photo of Brian Lara & CoA) found a new owner for £0.99 in September 2019. The month with the most items sold (18) was July 2020 with an average selling price of £13.00 for an autographed item of Brian Lara. Sold items reached their highest average selling price in July 2016 with £199.99 and the month that saw the lowest prices with £3.20 was January 2014. In average, an autographed item from Brian Lara is worth £15.00.

Most recently, these items with a signature of Brian Lara were sold on eBay - click here for more items.

Learning from West Indies legend Brian Lara now paying off nicely for Cambridge (06/26/14): Trying to be a bit more like Brian Lara is starting to work for Dougie Rice. A change of job has meant the Cambridge Granta batsman is back playing regularly for the club this season and he is grasping the chance handed to him to open the batting with good friend Johnny Atkinson.

Brian Lara hits half century for MCC against Herts at Lord’s (06/25/14): “This is our 200th birthday party and you are all very welcome to it.” The public address announcer at Lord’s set the tone for a special day at the home of cricket on Sunday, and Hertfordshire’s cricketers enjoyed every second of their chance to be part of the great occasion.

Brian Lara to play for the MCC in Lord's Anniversary match before star-studded R (06/21/14): Brian Lara will play for Marylebone Cricket Club (MCC) against Hertfordshire on Lord’s Anniversary Day on June 22.

Brian Lara to face Welwyn Garden City, North Mymms and Potters Bar cricket aces (06/2014): Hertfordshire will face one of the true legends of cricket when they help launch the bicentenary of Lord’s by playing MCC in a recreation of the very first match on the great ground on Sunday.

Inside Cricket: Forget Don Bradman or Brian Lara - Hedley Verity lays claim to t (05/2014): Scyld Berry: Most people will think of batsmen when it comes to breaking records, but only numerically perfect feat was accomplished by a bowler

Brian Lara: 'England will not be as invincible as past West Indies or Australia (07/2013): Cricket great talks Ashes 2013