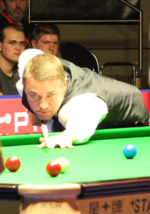 Stephen Gordon Hendry MBE (born 13 January 1969) is a Scottish professional snooker player as well as a commentator and television pundit for BBC and ITV. One of the sport's most accomplished players, he won the World Snooker Championship seven times between 1990 and 1999, surpassing the six world titles previously achieved by both Ray Reardon and Steve Davis. Aged 21 years and 106 days when he won his first world title, he remains the youngest world champion in the sport's history. He held the modern era record for the most world titles outright for 23 years, until it was equalled by Ronnie O'Sullivan in 2022. More about Stephen Hendry

Current items with a signature of Stephen Hendry

These are the most current items with a signature of Stephen Hendry that were listed on eBay and on other online stores - click here for more items.

Traded items with a signature of Stephen Hendry

Most recently, these items with a signature of Stephen Hendry were sold on eBay - click here for more items.

Stephen Hendry wins battle to build 11 homes in his mansion garden (03/10/15): Snooker champion Stephen Hendry (pictured) is set to build a multi-million pound housing development on land currently used as a horse paddock and stables on his Perthshire country estate.

Snooker legend Stephen Hendry recalls 1990 final ahead of rematch at Radlett Cen (02/26/15): Now, some 25 years on, the game’s greatest ever player and the Whirlwind will meet again to commemorate that occasion with a very special Snooker Legends show at The Radlett Centre on March 11.

Stephen Hendry turns down wild card to qualify for world championship (02/13/15): • Seven-times champion does not rule out playing at Crucible in future • Steve Davis and James Wattana also offered wild cards Stephen Hendry, the seven times world champion, will not be returning to the professional tour to try to qualify for this year’s tournament, but has not ruled out doing so i

Stephen Hendry open to comeback but rules out 2015 (02/13/15): Seven-time world champion Stephen Hendry will not be returning to the professional tour in order to try and qualify for this year's tournament, but has not ruled out doing so in the future.

Stephen Hendry considering ending retirement and returning to snooker (01/16/15): • ‘I will only play if I think I can play well and do myself justice’ • O’Sullivan records 776th century to break Hendry’s record Stephen Hendry has confirmed he could come out of retirement and return to snooker in time for the World Championship in April. The 46-year-old Scot was handed a wild car

Stephen Hendry's wife begins divorce proceedings against snooker legend (06/2014): MANDY Hendry launched her action in court yesterday two months after it was revealed the seven-times world champion had left her for a 26-year-old actress.

Seven-time world champion Stephen Hendry set to return to snooker in a baize of (04/2014): THE 45-year-old Scot, one of the greatest snooker players of all time, could make a sensational comeback at next year's World Championship in Sheffield.

Snooker legend Stephen Hendry bewildered why Ronnie O’Sullivan hasn’t been short (12/2013): HENDRY was the last snooker player to be shortlisted for the gong in 1990 when former Rangers and England international Paul Gascoigne won the coveted award.