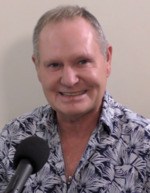 Paul John Gascoigne (/ˈɡæskɔɪn/, born 27 May 1967), nicknamed Gazza, is an English former professional footballer who played as a attacking midfielder. He is widely recognised as the most naturally talented English footballer of his generation. More about Paul Gascoigne

Current items with a signature of Paul Gascoigne

These are the most current items with a signature of Paul Gascoigne that were listed on eBay and on other online stores - click here for more items.

Traded items with a signature of Paul Gascoigne

Most recently, these items with a signature of Paul Gascoigne were sold on eBay - click here for more items.

BRYAN ROBSON: I'd love to see Jack Grealish at Man United and here's why he must (06/12/21): BRYAN ROBSON EXCLUSIVE: I can see the comparisons with Paul Gascoigne who was a phenomenal talent and now Grealish has the platform to show what he can do.

Paul Gascoigne on Ferguson and Keane as he chats with Jamie Redknapp (06/10/21): In the second part of Sportsmail's exclusive interview, Gazza explains what made him such a footballing maverick - and possibly the most mischievous and lovable player to grace the game.

England: Paul Gascoigne reminisces about the Euro 96 exploits with Jamie Redknap (06/08/21): In the first of an exclusive two-part interview, Sportsmail meets the inimitable Gazza to talk all things Euro 96 and that infamous pre-tournament trip to China and Hong Kong.

England hero Paul Gascoigne punched and headbutted his dead father's body as 're (02/08/21): John Gascoigne died from cancer in 2018 and the 1996 World Cup legend told of how he did not handle the death of his father, who put him in a mental institution in 2010, well.

Paul Gascoigne reveals he used to tell Roy Keane 'I'm sleeping with your wife' i (02/08/21): The midfield duo had clashed when Nottingham Forest took on Tottenham - and Gascogine used to constantly speak to Keane, a youngster at the time, in a wild bid to wind him up.

Ally McCoist on the genius of Paul Gascoigne and how Scotland major tournament h (11/2020): EXCLUSIVE INTERVIEW: Ally McCoist explains why another generation of Scottish palyers can't miss out on playing at a major tournament and how he regrets not taking McAllister's penalty in 96.

Can Jack Grealish be trusted? Gareth Southgate says Aston Villa star is not the (10/2020): Gareth Southgate, like many of his generation, baulked a little when the Paul Gascoigne question came. There aren't many who can bear comparison with the England No.10 who was among the best.

England legend Paul Gascoigne adds to his tattoo collection with love heart on l (08/2020): The world may be in a tough place but it's always better when Paul Gascoigne smiles. He was a picture of happiness on Friday as he got a new tattoo - a love heart on his left wrist.

Paul Gascoigne once stole Middlesbrough's brand new team coach and CRASHED befor (07/2020): Gascoigne, who was known for being a practical joker throughout his career, intended on taking it to the nearest bookies but ended up 'smashing it up' as he left the training ground.

Paul Gascoigne admits he is the happiest he has been for years (01/2020): The former England star has blown his £20million fortune from his playing career and gone in and out of rehab because of alcohol-related problems since retiring. He is now on the road to recovery.

Paul Gascoigne breaks down in tears on GMB as he says he'll 'never cha (10/2019): The ex-footballer told GMB: "I've been like this for years and years"

Flashback: Paul Gascoigne lifts the gloom on Tyneside with Newcastle United debu (04/2015): It's 30 years since a 17-year-old from Dunston, Gateshead, lit up a whole city, not just a football club

With Jose Mourinho, Noel Gallagher and Paul Gascoigne on screen there was no nee (02/2015): Broadcasters are happy now to forget the football and cut straight to rows, rants and celebrity guests, says Alan Tyers

Paul Gascoigne spotted shuffling out of his local off licence in a pair of slipp (01/2015): The former England footballer, who was briefly sectioned after an apparent alcohol binge in October last year, kept a carrier bag hidden as he emerged from a branch of Oddbins in Poole, Dorset.

'Me and my 3 family rascals' Paul Gascoigne looks fit, healthy and happy in Chri (12/2014): IT'S BEEN a tough year for Paul Gascoigne but it looks like the former footballer enjoyed Christmas at home with his family.

Paul Gascoigne all smiles after netting two trout on a fishing trip (09/2014): Paul Gascoigne looked to have scored the catch of the day as the smiling star netted two huge trout during an outing with a friend in Hampshire

'I know I can overcome this' Paul Gascoigne says latest relapse was a 'blip' (08/2014): PAUL Gascoigne has insisted that it was his choice to get into an ambulance after relapsing and getting drunk again earlier this month.

#freegaza Twitter campaign confuses Paul Gascoigne fans who think he's been arre (07/2014): Fans thought the former football star had been arrested after #freegaza - shared in response to violence in the Middle East - started trending on Twitter.

Ross Barkley has the same skill, vision and bare-faced cheek as Paul Gascoigne (06/2014): ROB SHEPHERD: Ross Barkley seems to be a genuine heir to Paul Gascoigne, in football terms at least. The manner in which he set up Rickie Lambert for England’s second goal in Miami was straight out of Gazza

Paul Gascoigne To Run The Bar On Celebrity Big Brother (05/2014): PAUL Gascgoinge's tweets are font-page news in the Daily Star...

Paul Gascoigne paid damages by the Daily Express and Daily Star (03/2014): Paul Gascoigne has accepted damages from the Daily Express and Daily Star in settlement of his legal action for defamation and intrusion into his privacy. He made the claim against the newspapers after they published video footage on their websites showing him in an allegedly drunken and incoherent

Paul Gascoigne back in rehab AGAIN as friends fear for his life (01/2014): PAUL GASCOIGNE has been readmitted to rehab with friends concerned he may be back on the booze.

Ross Barkley can be England's next Paul Gascoigne - Martin Allen (12/2013): Martin 'Mad Dog' Allen returns for his second of his new weekly column for MailOnline Sport. The former Gillingham boss does not hold back with his views on current issues in the football. In his this week’s column he says Ross Barkley can be the next Pa

Paul Gascoigne wears disguise WhoSay (11/2013): He never went unnoticed for long on the pitch with his dazzling skills and has hardly had a moment out of the limelight since hanging up his boots, but the former England midfielder is now going to great lengths to hide himself away from the media glare.

Paul Gascoigne books five-star London hotel despite threat of eviction from his (10/2013): Boozer Gazza spent most of last week drinking in his room and took a £40 taxi journey... to buy a Lottery ticket and 60 cigarettes.

Paul Gascoigne speaks of mad Moat moment (06/2013): Speaking at a question and answer session in South Shields, Paul Gascoigne revealed the night he tried to save killer Raoul Moat