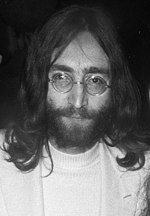 John Winston Ono Lennon (born John Winston Lennon; 9 October 1940 – 8 December 1980) was an English singer, songwriter, musician and peace activist who achieved worldwide fame as co-lead vocalist, co-songwriter and rhythm guitarist of the Beatles as well as one of the founders of the group. His songwriting partnership with Paul McCartney remains the most successful in history. In 1969, he started the Plastic Ono Band with his second wife, Yoko Ono. After the Beatles disbanded in 1970, Lennon continued his career as a solo artist and as Ono's collaborator. More about John Lennon

Current items with a signature of John Lennon

These are the most current items with a signature of John Lennon that were listed on eBay and on other online stores - click here for more items.

Traded items with a signature of John Lennon

The most expensive item with a signature of John Lennon (1965 THE BEATLES full set of autographs whilst filming HELP! signed John Lennon) was sold in June 2019 for £3999.99 while the cheapest item (JOHN LENNON Shot Dead Newspaper The Beatles New York Liverpool Signed Old Retro) found a new owner for £0.01 in May 2021. The month with the most items sold (31) was October 2018 with an average selling price of £10.50 for an autographed item of John Lennon. Sold items reached their highest average selling price in March 2016 with £1200.00 and the month that saw the lowest prices with £1.89 was July 2017. In average, an autographed item from John Lennon is worth £13.93.

Most recently, these items with a signature of John Lennon were sold on eBay - click here for more items.

Police at Liverpool John Lennon airport to raise awareness of human trafficking (04/10/15): Officers will be speaking to passengers in the departure area over the next few days

John Lennon's first wife Cynthia dies at 75 (04/01/15): Cynthia Lennon, first wife of late Beatle John Lennon, has died, her family said on Wednesday. "Cynthia Lennon passed away today at her home in Mallorca, Spain, following a short but brave battle with cancer," according to a statement on her son Julian's website. "Her son Julian Lennon was at her be

Logistics firm sees turnover almost double as it boosts freight at Liverpool Joh (12/2014): The Parcel Centre is a re-working of a delivery firm set up by entrepreneur David Hughes at LJLA 20 years ago

John Lennon's Glasses To Be Auctioned (10/2014): A pair of glasses once worn by John Lennon is expected to fetch up to $40,000 (£25,000) at auction next month (Nov14). The spectacles have been sitting in an underwear drawer since he gave them to a cheeky woman who pinched his backside while they were dancing at a nightclub in London in the 1960s.

Theatre News: John Lennon play set to tour the North West (09/2014): John and Mark and Naked Old Man are being staged as part of a double bill.

John Lennon's killer says Jesus has 'made the difference' in his life (08/2014): The man who shot John Lennon more than 30 years ago claimed at his parole hearing that God has taught him to see that there are other people in the world.

Mark McGann talks about his ongoing portrayal of John Lennon (07/2014): In My Life show comes to the Royal Court Theatre for International Beatle Week

Yoko Ono excited for Glastonbury 2014 and says John Lennon would have loved it (06/2014): Yoko Ono has admitted she can’t wait to get muddy performing at Glastonbury - and is convinced John Lennon would have loved being at the festival. The 81-year-old is planning a spectacular appearance on stage on Sunday along with a new backing band made up of Am

John Lennon 'nonsense' lyrics about parrots and pancakes fail to sell at auction (02/2014): As the genius behind songs like Imagine and Working Class Hero, John Lennon's lyrics are the stuff of legend. Even legends can have their off-days it seems, as a garbled bunch of lyrics by the Scouse singer have failed to sell at auction.

Investigation launched after laser pen shone at cockpit of plane landing at Live (01/2014): Ryanair Boeing 737 flight targeted by a beam believed to have come from the Neston area of Wirral at around 11.05pm on Wednesday

John Lennon's first home sells for €560,447 (10/2013): It's a comfortable but modest dwelling with a lounge, a sitting room, an upstairs bathroom, a family room and a kitchen leading to a walled yard but John Lennon's childhood home went for nearly half a million Euro at auction in The Cavern yesterday

Piece of wood featuring John Lennon's lyrics to 'Sexy Sadie' up for auction (09/2013): The memento features the song's original lyrics and is expected to fetch £150,000

John Lennon's Imagine Microphone Up For Sale (07/2013): The microphone John Lennon used to record his 1971 album Imagine is up for sale on listings website Craigslist.com.The London-based seller, who is...

Yoko Ono Vows To Carry On John Lennon's 'Battle For Freedom And Justice' (05/2013): The Artist Says She Never Felt Like A Grieving Widow