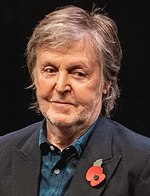 Sir James Paul McCartney CH MBE (born 18 June 1942) is an English singer, songwriter, musician, and record and film producer who gained worldwide fame as co-lead vocalist, co-songwriter, and bassist for the Beatles. His songwriting partnership with John Lennon remains the most successful in history. After the group disbanded in 1970, he pursued a solo career and formed the band Wings with his first wife, Linda, and Denny Laine. A self-taught musician, McCartney is proficient on bass, guitar, keyboards, and drums. He is known for his melodic approach to bass-playing (mainly playing with a plectrum), his versatile and wide tenor vocal range (spanning over four octaves), and his eclecticism (exploring styles ranging from pre-rock and roll pop to classical and electronica). More about Paul McCartney

Current items with a signature of Paul McCartney

These are the most current items with a signature of Paul McCartney that were listed on eBay and on other online stores - click here for more items.

Traded items with a signature of Paul McCartney

Most recently, these items with a signature of Paul McCartney were sold on eBay - click here for more items.

Paul Mccartney: 'Lady Gaga Hung Up On My Aide' (04/01/15): Sir Paul Mccartney Has Clarified Lady Gaga's Boast That She Put The Phone Down On The Beatles Legend, Revealing The Pop Star Actually Hung Up On His Assistant.

Paul McCartney finds musical inspiration in the toilet (03/31/15): The music star reckons going to the loo is a good move for striking songwriting gold.

Rapper Pitbull developing reality TV series with Michelle Obama and Paul McCartn (10/2014): The pop star will team with the Weinstein Company on two new shows a behind-the-scenes documentary and a look at the mentors who have guided big names in sport, music and politics The rapper Pitbull, known for his shiny suits, reflective sunglasses and lecherous pop, is branching out into TV with tw

Paul Mccartney Urges Scots To Shun Independence (08/2014): Sir Paul Mccartney has added his weight to a campaign against Scottish independence. The Beatles legend has signed an open letter to voters in the country urging them to choose 'No' in a crucial poll over plans for the nation to break away from the rest of the U.K.

Sir Paul McCartney tells LIPA graduates 'go out there and be wonderful' (07/2014): Ex-Beatle spoke of his determination to save his old school building with Mark Featherstone-Witty

Paul McCartney collaborates with a robot for new video 'Appreciate' (06/2014): Paul McCartney's New video has him dancing with Newman the robot.

Sir Paul McCartney Plays Record Breaking Ecuador Show (04/2014): Including special rendition of 'All You Need Is Love' Sir Paul McCartney doesn't have a lot of records left to break. Yet the iconic performer's new South American tour has brought with it another milestone. Performing his first ever show in Ecuador, Sir Paul McCartney completed his highest ever liv

Lily Allen & Paul McCartney Glam Up NME Awards: See the Full List of Winners Her (02/2014): London’s Brixton Academy was the place to be last night (February 26) as the 2014 NME Awards took over with a star-studded guest list. Sir… via Emag.co.uk

Paul McCartney: Fame changes you (09/2013): Sir Paul McCartney believes fame forces you to change.The 71-year-old music icon - who has been dubbed the most successful songwriter in UK chart...

Paul McCartney says he never wants to retire (08/2013): Singer says he wants to keep on going ahead of 'New' release

Paul McCartney not famous in Wings (06/2013): Sir Paul McCartney didn't feel famous when he was in Wings. The 'Band on the Run' singer formed the rock band after being in The Beatles, and liked...