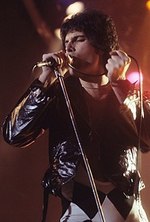 Freddie Mercury (born Farrokh Bulsara; 5 September 1946 – 24 November 1991) was a British singer, songwriter, record producer, and lead vocalist of the rock band Queen. Regarded as one of the greatest singers in the history of rock music, he was known for his flamboyant stage persona and four-octave vocal range. Mercury defied the conventions of a rock frontman, with his highly theatrical style influencing the artistic direction of Queen. More about Freddie Mercury

Current items with a signature of Freddie Mercury

These are the most current items with a signature of Freddie Mercury that were listed on eBay and on other online stores - click here for more items.

Traded items with a signature of Freddie Mercury

Most recently, these items with a signature of Freddie Mercury were sold on eBay - click here for more items.

WWE's Renee Young Reveals Her Dream Interviews Would Be Prince And Freddie Mercu (03/2015): Interviewer is defo a fan of Prince...

Margaret Hofman from Canterbury spots Queen frontman Freddie Mercury's face in a (10/2014): A Queen fan was left wondering, 'Is this the real life? Is this just fantasy?' after the legendary frontman's face appeared... in a pile of coats.

Ben Whishaw Dismayed By Freddie Mercury Biopic Delay (08/2014): British actor Ben Whishaw is baffled by the latest delay of the long-awaited Freddie Mercury biopic. The Skyfall star took over the role in November (13) after previous leading man Sacha Baron Cohen left the project in July (13) due to creative differences.

The day Freddie Mercury played at Queens Park (06/2014): WHATEVER your favourite memories of Queens Park, Bolton Council wants to hear from residents so their stories of the historic beauty spot can be recorded for a new film.

Axl Rose: I'd Rather Listen To Freddie Mercury Than Myself (05/2014): Axl Rose Responds To Claims he's The World's Greatest Singer. The Guns N' Roses frontman recently topped a list of the world's greatest singers. The chart, put together by ConcertHotels, shows the highest and lowest notes each artist hit in the recording studio.

Paul Rudd Lip Syncs To Tina Turner And Freddie Mercury, Makes Our Day (02/2014): Oh, and Jimmy Fallon did some lip syncing too. But mostly? Mostly it was about Paul Rudd 'performing' Tina Turner's 'Better Be Good To Me' and Queen's 'Don't Stop Me Now'...

Inside the studio where Freddie Mercury sang his last song (11/2013): Take a look inside the studios where Queen recorded many of their best known songs

'He's The Best': Psy Credits Queen's Freddie Mercury For Summertime Ball Wembley (06/2013): The K-Pop Star Says He Wouldn't Be A Popstar Without The Band