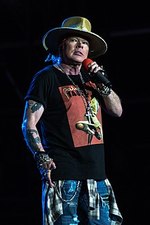 W. Axl Rose (born William Bruce Rose Jr.; born February 6, 1962) is an American musician, singer, songwriter and record producer. He is best known for being the lead vocalist and lyricist of the hard rock band Guns N' Roses, and has also been the band's sole constant member since their inception in 1985. He has also toured with Australian rock band AC/DC, deputising for Brian Johnson after Johnson's hearing loss in 2016. Rose has been named one of the greatest singers of all time by various media outlets, including Rolling Stone and NME. More about Axl Rose

Current items with a signature of Axl Rose

These are the most current items with a signature of Axl Rose that were listed on eBay and on other online stores - click here for more items.

Traded items with a signature of Axl Rose

Most recently, these items with a signature of Axl Rose were sold on eBay - click here for more items.

Axl Rose named 'greatest singer of all time', beats Beyoncé, Prince (12/30/14): Taylor Swift and Justin Bieber feature at the bottom of the scale.

Guns N' Roses deny Axl Rose is planning to retire (12/10/14): A source within the band's camp dismisses claim as 'bullshit'

Guns N' Roses deny Axl Rose is planning to retire (12/2014): A source within the band's camp dismisses claim as 'bullshit'

Slash: 'I Cannot Picture An Axl Rose Reunion' (09/2014): Rocker Slash has ruled out any kind of reunion with former Guns N' Roses bandmate Axl Rose , insisting he simply cannot picture a get together.

Axl Rose Gives Opinion On Being Named 'World's Greatest Singer' (05/2014): While the recognition is "very flattering and humbling," the 52 year-old singer feels Freddie Mercury, Elvis Presley and Paul McCartney are all better than him.

Axl Rose Pours Out Feelings About Giraffe Slaughter 'Tragedy' In Open Letter (02/2014): Rocker Axl Rose has written an open letter in which he takes aim at zoo bosses in Denmark for their lack of humanity after slaughtering a beloved...

Axl Rose's Ex-Wife Selling Off Wedding Memorabilia (11/2013): Axl Rose's ex-wife is selling off loads of stuff relating to their marriage - including their marriage certificate and a domestic violence police report.