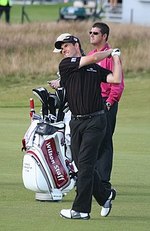 Pádraig Peter Harrington (born 31 August 1971) is an Irish professional golfer who plays on the European Tour and the PGA Tour. He has won three major championships: The Open Championship in 2007 and 2008 and the PGA Championship, also in 2008. He spent over 300 weeks in the top-10 of the world rankings, and reached a career-high ranking of third in July 2008. More about Padraig Harrington

Current items with a signature of Padraig Harrington

These are the most current items with a signature of Padraig Harrington that were listed on eBay and on other online stores - click here for more items.

Traded items with a signature of Padraig Harrington

Most recently, these items with a signature of Padraig Harrington were sold on eBay - click here for more items.

Padraig Harrington admits Ryder Cup may have to 'take one for the team' and go a (04/29/20): The Europe captain is determined to lead his side out at Whistling Straits, Wisconsin in September but accepts that the decision over whether the event should go ahead is 'above my pay grade'.

How can the World Golf Hall of Fame snub a legend like three-time major champion (04/20/20): DEREK LAWRENSON - WORLD OF GOLF: you are loath to argue with a 20-strong selection committee containing players like Nick Price, Curtis Strange and Annika Sorenstam.

'I'll pick all 12 players if I have to': Harrington says we must not postpone th (03/31/20): EXCLUSIVE BY DEREK LAWRENSON: Europe's captain Padraig Harrington could hardly be any clearer when it comes to the two schools of thought regarding this year's Ryder Cup.

It all goes wrong for Pádraig Harrington (04/2015): Satisfaction, relief, tension and disappointment – Ireland’s Masters competitors ran the range of emotions at Augusta National last night as the first major of the year reached the halfway stage.

Padraig Harrington off to a flyer in Florida (03/2015): Padraig Harrington carded a flawless round of four under par to lie just two shots off leader Morgan Hoffman at the Arnold Palmer Invitational in Florida, while Rory McIlroy is also in the hunt.

Euan McLean: Padraig Harrington clears his biggest hurdle to success ... himself (12/2014): RECORD Sport's EUAN McLEAN looks at the resurgence of Irish star as he wins his first tournament in four years.

Dunhill Links Championship: Forgotten man Padraig Harrington plots return to top (10/2014): HARRINGTON has gone six years without a title but showed glimpses of his old self in the first round of the Dunhill Links at Carnoustie yesterday and says he is targeting a top 15 place in two years' time.

Why Ireland is a bit like Padraig Harrington when it comes to being competitive (08/2014): In the run-up to Budget 2015, Dr Daragh McGreal looks at why Ireland has lost its competitive edge.

Watch: Padraig Harrington on why golf's biggest names can't wait to get back to (06/2014): Two-time winner was at the Royal Liverpool to give a masterclass ahead of the tournament

Three-time major winner Padraig Harrington needs Masters miracle after falling o (03/2014): After two rounds of 70 in the Arnold Palmer Invitational, Padraig Harrington would normally be a contented soul heading into the weekend at Bay Hill. Not this year.

Three Time Major Winner Padraig Harrington Treated for Skin Cancer (02/2014): Padraig Harrington underwent treatment for skin cancer, the three time major winner has revealed. "I've had a number of skin cancers removed off my face," Harrington said speaking on Today FM's 'The Last Word' programme. The father of two, whose father Paddy passed away from cancer of the oesophagus

Ryder Cup: Paul McGinley insists old pal Padraig Harrington must play his way in (01/2014): DESPITE a history together in the Ryder Cup, McGinley insists there will be no favours for countryman Harrington when it comes to European Team selection for the Gleneagles event.