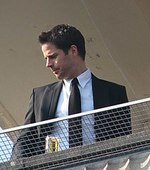 Jamie Frank Redknapp (born 25 June 1973) is an English former professional footballer who was active from 1989 until 2005. He is a pundit at Sky Sports and an editorial sports columnist at the Daily Mail. A technically skillful and creative midfielder, who was also an accurate and powerful free-kick taker, Redknapp played for AFC Bournemouth, Southampton, Liverpool, and Tottenham Hotspur, captaining the latter two. He also gained 17 England caps between 1995 and 1999, and was a member of England’s squad that reached the semi finals of Euro 1996. His 11 years at Liverpool were the most prolific, playing more than 237 league games for the club, including a spell as captain, and being involved in winning the 1995 Football League Cup Final. More about Jamie Redknapp

Current items with a signature of Jamie Redknapp

These are the most current items with a signature of Jamie Redknapp that were listed on eBay and on other online stores - click here for more items.

Traded items with a signature of Jamie Redknapp

Most recently, these items with a signature of Jamie Redknapp were sold on eBay - click here for more items.

Arsenal: Mikel Arteta's moans over officiating in Spurs loss waved away by Jamie (05/12/22): The top four race in the Premier League took another dramatic twist in the north London derby on Thursday night, with Spurs clinching an emphatic 3-0 victory.

Arsenal defender Rob Holding criticised by Jamie Redknapp after red card against (05/12/22): Arsenal centre back Rob Holding has impressed in recent weeks in place of the injured Ben White, but was left red-faced in north London after picking up two poor bookings in a crucial derby match.

Erling Haaland's arrival at Man City is a 'game changer' for the Premier League, (05/10/22): The Premier League champions announced on Tuesday the Norway international will join Pep Guardiola's squad for next season following a £51million transfer from Borussia Dortmund.

Arsenal: Mikel Arteta's new contract 'absolutely' deserved, Jamie Redknapp says (05/08/22): Boss Arteta put pen to paper on a new three-year deal at the Emirates during the week, fresh terms that keep him at the club until the end of the 2024/25 campaign.

Villarreal must stop the flow to Thiago to prevent Liverpool getting into their (04/2022): JAMIE REDKNAPP: Thiago is so influential that he's starting every big game in Liverpool's Quadruple chase - and now it is Villarreal's turn to try to stop the flow to him in this first leg.

Jamie Redknapp slams Chelsea boss Thomas Tuchel for replacing Mendy with Kepa ag (02/2022): Kepa failed to save one penalty before having to take a spot-kick himself, which he blazed over to hand Jurgen Klopp's men victory at Wembley.

Jamie Redknapp claims Antonio Conte could leave Tottenham if he isn't backed pro (01/2022): Since arriving at Spurs in November, Conte has made a big impact in north London, leading his side to 21 points from a possible 30 in the Premier League, which has put them in top four contention.

'It did my head in'': Jamie Redknapp hits out at Thiago's critics as he heaps pr (09/2021): Former England midfielder Jamie Redknapp has hit out at critics of Liverpool midfielder Thiago, saying that they do not understand the midfield role.

Jamie Redknapp says Man City's failed pursuit of Harry Kane is 'great news' for (08/2021): On Wednesday, Kane dealt a crushing blow to City's hopes of landing the marksman after insisting that he is now fully focused on the task at hand at Spurs for the 2021-22 campaign.

Euro 2020: Mason Mount needs to be aggressive on his Chelsea teammate Jorginho a (07/2021): JAMIE REDKNAPP: On Sunday, the Italian to stop is Jorginho. Spain did a great job of limiting his influence in the semi-finals. Italy only had 29 per cent possession and were glad to get to penalties.

Liverpool centre back Nat Phillips' story 'is what dreams are made of', insists (05/2021): Phillips, 24, has been forced to step in with several of his team-mates out with injuries and has caught the eye with a series of assured and mature showings. His latest came at Turf Moor.

Jamie Redknapp claims Harry Kane and Mourinho could leave if Spurs fail in top-f (03/2021): Tottenham could face losing their star striker and manager if they do not secure a top-four finish and win the Carabao Cup, according to former Spurs midfielder Jamie Redknapp.

Which Arsenal players are 'kidders' and which squad members are 'fighters' after (12/2020): Jamie Redknapp insisted Mikel Arteta can only rely on three or four Arsenal players, but the Gunners boss insists he saw 'a lot fighters' in his team following the defeat by Manchester City.

Jurgen Klopp opens up on Liverpool's injury crisis and why five subs are despera (11/2020): From the Premier League title race to Liverpool's new training ground, Klopp now has a few things he would like to get off his chest, and he sat down with Sportsmail's Jamie Redknapp to do that.

Jamie Redknapp insists Lucas Digne should NOT have been sent off in Everton's de (10/2020): Lucas Digne caught Kyle Walker-Peters on the back of his foot with his studs as he chased down the former Tottenham man, and despite his protests was sent for an early shower.

Chelsea have exceeded expectations despite Jamie Redknapp's prediction they woul (07/2020): Sky Sports pundit Jamie Redknapp predicted the Blues would miss out on the top four and silverware after losing Eden Hazard to Real Madrid before being placed under a transfer embargo by FIFA.

JAMIE REDKNAPP: 'Celebrating Gazza's goal was almost as much fun as the dentist' (05/2020): JAMIE REDKNAPP: As soon as that went in, I bust a gut to get over to him, because I knew what he was about to do. We'd been in the news because of our night out during the pre-tournament trip.

Jamie Redknapp backs Jadon Sancho to make £100m move to Manchester United (04/2020): The Borussia Dortmund star is United's top transfer target and the club are said to be convinced they have got their man after holding secret talks, according to recent reports.

'I'll beat Rooney's England record': Harry Kane on milestones, Mourinho and why (03/2020): JAMIE REDKNAPP: Harry Kane is at home, in self-isolation, with a series of Tottenham Hotspur shirts on the wall behind him and Sportsmail's Jamie Redknapp on the screen in front.

JAMIE REDKNAPP: Nuno has transformed Adama Traore from FIFA pace merchant to Pre (01/2020): JAMIE REDKNAPP: Hands up if you remember former Swansea and Coventry City player John Williams, or 'The Flying Postman' as he was known. Adama Traore might be a lot like him.

JAMIE REDKNAPP: Using armpits as arbiters is what's kicked up a stink... let's j (12/2019): I say get rid of this shoulder and armpit nonsense and judge offside by the players' feet. Draw the line and see whether the attacker's foot is closer to the goal then that of the last defender.

"It was staggering Falcao wasn't used": Jamie Redknapp and other pundits assess (03/2015): United will now finish the campaign empty handed for a second consecutive season, with the club yet to pick up a major piece of silverware since Sir Alex Ferguson retired almost two years ago.

Former TV pundit Richard Keys claims Jamie Redknapp 'lost plot' and 'wanted to f (02/2015): BOTH Keys and Redknapp worked at the 2008 North London derby draw in 2008 as Spurs pulled back a goal to draw level.

Liverpool news and transfers: Jamie Redknapp insists Reds were ''absolutely magn (12/2014): Here are today's Reds stories from the Mirror... Defiant Brendan Rodgers has insisted Liverpool have shown the “quality, desire and confidence” to snatch a top-four finish this season.

JAMIE REDKNAPP: Five key areas that will decide Saturday's showdown between Arse (11/2014): Scotland vs England was a good tear-up, but I cannot wait for the return of the Premier League and this is a fixture that has me licking my lips. Make no mistake about it, this is a big game.

Neil Ruddock dresses as a policeman and strips for Jamie Carragher and Jamie Red (09/2014): When former teammates get back together there are always a few surprises, but Neil Ruddock may have taken that a step further than usual.

JAMIE REDKNAPP: England never managed to get the best out of Steven Gerrard (07/2014): Steven Gerrard was the best English midfielder since Paul Gascoigne, but you have to ask why England didn’t get more out of him. People talk about David Beckham a

JAMIE REDKNAPP: Barkley can be English answer to Bale... he MUST go to Brazil (03/2014): Ross Barkley could end up playing at the same level as Gareth Bale. He could become the greatest player of his generation — how on earth did David Moyes buy

Jamie Redknapp: AFC Bournemouth spell helped me make the grade at Liverpool (01/2014): JAMIE Redknapp – an ex-player with a foot in both FA Cup camps – has revealed how his time at Dean Court helped him make the grade with Liverpool.

JAMIE REDKNAPP: My Merseyside composite XI (11/2013): These teams are never easy to select. I’ve changed my mind a couple of times. And I’ve ended up with a team to attack – and not one that Jose Mourinho would send out to win 1-0 on its travels.