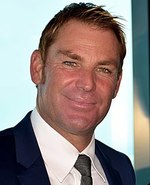 Shane Keith Warne (13 September 1969 – 4 March 2022) was an Australian international Hall of Fame cricketer who played from 1991 to 2007 as a right-arm leg spin bowler and a right-handed batsman for Victoria, Hampshire and Australia. He is widely acknowledged to have been one of the sport's greatest-ever bowlers. He made 145 Test appearances, taking 708 wickets. More about Shane Warne

Current items with a signature of Shane Warne

These are the most current items with a signature of Shane Warne that were listed on eBay and on other online stores - click here for more items.

Traded items with a signature of Shane Warne

The most expensive item with a signature of Shane Warne (Cricket Legend Signed By Shane Warne) was sold in May 2013 for £5495.00 while the cheapest item (shane warne signed) found a new owner for £0.06 in July 2020. The month with the most items sold (127) was March 2022 with an average selling price of £89.99 for an autographed item of Shane Warne. Sold items reached their highest average selling price in September 2015 with £169.99 and the month that saw the lowest prices with £2.00 was March 2020. In average, an autographed item from Shane Warne is worth £20.25.

Most recently, these items with a signature of Shane Warne were sold on eBay - click here for more items.

Phil Tufnell on his hair transplant, why he isn't the new Shane Warne and how th (12/2014): The brilliant bowler was England cricket team’s joker in the pack for 11 years but left plenty in a spin when he took part in I’m A Celebrity... Get Me Out of Here!

Watch Shane Warne suffer BROKEN HAND from ex-Australia team-mate Brett Lee's bea (10/2014): When Shane Warne stepped on to the crease at Lord's 200th anniversary this weekend, he would have been expecting an easy ride. The Australian legend was lining up in the bicentenary MCC vs Rest of World clash, with ex-team mate and long-time pal Brett Lee at the other end of the wicket.

Shane Warne Announces Split From Emily Scott On Twitter After Just THREE Months (09/2014): They're just not at the same 'stages in life'. Apparently.

England v India: Jos Buttler is hero to thrill the kids, says Shane Warne (07/2014): Shane Warne has backed Jos Buttler to inspire a generation of young cricket fans as the new “superstar” of the England team.

England gagged over Shane Warne row after criticism of captain Alastair Cook (06/2014): England’s players have been told they face being fined if they engage in a war of words with Sky commentator Shane Warne as senior ECB officials fear upsetting their biggest commercial partner.

Liz Hurley makes a sideways dig at Shane Warne and Michelle Mone (02/2014): Former actress Elizabeth Hurley has made a sideways at her ex-boyfriend, Shane Warne - by implying that his new girlfriend looks like a character from Planet of the Apes.

Shane Warne's expertise outweighs all else as CA brings him inside the tent (01/2014): Warne's knack of attracting all kinds of publicity will not detract from the unique insight he can offer Twenty20 spinners Russell Jackson

BUMBLE AT THE TEST: Bell's dismissal sums England up and Shane Warne definitely (12/2013): David 'Bumble' Lloyd firmly believes that England's batsman must play their natural games and argues they haven't been doing so during this dismal Ashes series... and Shane Warne takes after his mother - make of that what you will!

Shane Warne sells Melbourne mansion for $13.7 mln (11/2013): Australian spin legend Shane Warne has sold his sprawling Melbourne home for around Aus$15 million (US$13.7 million), reports said on Tuesday, amid speculation he is relocating to Britain.

Shane Warne's ex-wife says she's not to blame' for his split with Liz Hurley (09/2013): SHE'S ruling herself out of this equation.

Shane Warne labels England players arrogant for 'urinating on The Oval pitch' (08/2013): Australia great Shane Warne has called England 'crass' and 'arrogant' following reports that a number of players urinated on the pitch at the Kia Oval following the fifth Ashes Test.

The Ashes: Michael Clarke talks to Shane Warne then states - don't laugh but we (07/2013): Shane Warne returned to the place where he bowled the ball of the last century to suggest to his successors how they might bowl the ball of this one. The magic needs to rub off quickly for Australia to have a prayer of pulling back this Ashes series, but then Warne has plenty of it.