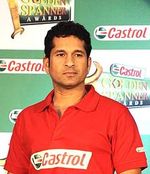 Sachin Ramesh Tendulkar AO BR (/ˌsʌtʃɪn tɛnˈduːlkər/ (listen); pronounced ; born 24 April 1973) is an Indian former international cricketer who captained the Indian national team. He is regarded as one of the greatest batsmen in the history of cricket. More about Sachin Tendulkar

Current items with a signature of Sachin Tendulkar

These are the most current items with a signature of Sachin Tendulkar that were listed on eBay and on other online stores - click here for more items.

Traded items with a signature of Sachin Tendulkar

The most expensive item with a signature of Sachin Tendulkar (Signed Sachin Tendulkar Helmet - India Cricket Autograph +COA) was sold in April 2022 for £4999.99 while the cheapest item (Genuine sachin tendulkar Hand Signed Photo 12x8 Famous Cricket Player) found a new owner for £0.99 in June 2015. The month with the most items sold (19) was November 2014 with an average selling price of £100.00 for an autographed item of Sachin Tendulkar. Sold items reached their highest average selling price in February 2017 with £249.99 and the month that saw the lowest prices with £4.20 was April 2016. In average, an autographed item from Sachin Tendulkar is worth £39.95.

Most recently, these items with a signature of Sachin Tendulkar were sold on eBay - click here for more items.

Sachin Tendulkar: my memories of the Cricket World Cup 2011 final (02/14/15): Sachin Tendulkar relives his favourite moment in his illustrious career.

WELL B W ... Stephen Pearson bowled over by cricket legend Sachin Tendulkar (01/21/15): THE Fir Park midfielder speaks of his amazing Indian experience and his delight at being back with Motherwell.

Sachin Tendulkar to become a Bollywood star (01/08/15): India's greatest batsman to play himself in a movie about his life

Sachin Tendulkar closes 'first innings' for India with autobiography and focuses (11/11/14): Exclusive interview: Indian legend tells Jonathan Liew how he hopes to help transform his country's sporting culture - and why he has not gone out alone in 25 years

Little Master's little master: Sachin Tendulkar's son blasts ton in school match (09/2014): Sachin Tedulkar's 15-year-old son could be a chip off the old block judging by his exploits in a school tournament in India. Arjun Tendulkar hit 118 from 42 balls.

Sachin Tendulkar's retirement has exposed Board of Control for Cricket in India' (08/2014): Tanya Aldred: Poor Indian crowds for Test series against England have highlighted team's failure to connect with supporters, and BCCI is to blame

London Firm East India Company Mints £12,000 Sachin Tendulkar Gold Coin (06/2014): Sachin Tendulkar has been imortalised in gold after a London-based company minted a coin engraved with the cricket legend on it worth £12,000 - 30-times the average income in his native India. To celebrate the 41-year-old's legacy, London-based commemorative coin manufacturers East India Company pro

Brian Lara, Sachin Tendulkar and Kevin Pietersen to play in MCC match against Re (05/2014): Brian Lara and Aaron Finch will line up for the MCC against a Rest of the World XI on July 5.

Virat Kohli: the Man Who Will Succeed Sachin Tendulkar as the World's Best Batsm (01/2014): A lot of cricket fans across India consider him to be a legend in the making. He may not possess the calm demeanour of Rahul Dravid, but his batting skills and aggressive nature more than compensate. Since rising through India's Under-19 team, Gus Poyet took the reigns at Sunderland, Adnan Januzaj struck twice on his full debut, Sir Alex Ferguson released his autobiography and Sachin Tendulkar r

Sachin Tendulkar declared fit for Indian Premier League action (08/2013): • 38-year-old recovers from toe injury for Mumbai Indians • 'There is no question of any surgery,' says franchise Sachin Tendulkar will be able to take part in this year's Indian Premier League after receiving the all-clear on his troublesome toe injury. The record-breaking batsman missed last year'

The Top Spin: At least Sachin Tendulkar left the IPL on a high (05/2013): On Sunday, Sachin Tendulkar announced his retirement from the IPL and as the cricketing world goes slightly mad, one of the few comforting thoughts may be that Tendulkar’s last deed before injuring his left hand was to depart the IPL with a six – a Yes Bank Maximum, no less!