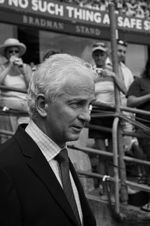 David Ivon Gower OBE (born 1 April 1957) is an English cricket commentator and former cricketer who was captain of the England cricket team during the 1980s. Described as one of the most stylish left-handed batsmen of his era, Gower played 117 Test matches and 114 One Day Internationals (ODI) scoring 8,231 and 3,170 runs, respectively. He was one of the most capped and high scoring players for England during his period. More about David Gower

Current items with a signature of David Gower

These are the most current items with a signature of David Gower that were listed on eBay and on other online stores - click here for more items.

Traded items with a signature of David Gower

The most expensive item with a signature of David Gower (Hand Signed 8x10 photo DAVID GOWER England Ashes CRICKET Captain LEGEND + my COA) was sold in November 2021 for £175.00 while the cheapest item (Autographed Photo of David Gower, England's Cricketer) found a new owner for £0.01 in March 2021. The month with the most items sold (13) was November 2020 with an average selling price of £2.99 for an autographed item of David Gower. Sold items reached their highest average selling price in September 2016 with £41.99 and the month that saw the lowest prices with £0.99 was May 2013. In average, an autographed item from David Gower is worth £4.99.

Most recently, these items with a signature of David Gower were sold on eBay - click here for more items.

David Gower: 'Losing £50,000 on a golf course was an investment lesson' (03/14/15): Fame & Fortune: the ex-international cricketer talks about London properties he's bought without seeing and the £65,000 car he drives

David Gower: the cricket fan is a friendly beast - largely (02/13/15): My perfect weekend: former England cricketer and Sky Sports commentator David Gower, 57, says once you reach a certain age, your fans only remember the good bits

Cricket legend David Gower reveals a lifetime’s passion for sport and wildlife a (09/01/14): WLT patron David Gower represented WLT during the Emeralds for Elephants auction in India. While he was out in India he also spent time in Ranthambore.

Cricket legend David Gower embarks on a Caribbean cruise (08/2014): In his time, former England cricket captain David Gower was a player of elegance and style. The same could be said of the cruise that took him around the Caribbean.

English cricket in crisis? David Gower examines the problems and solutions (07/2014): Alastair Cook : the batsman “From experience, when you’re low on confidence or you’re aware that things are just not going your way, batting becomes ten times harder. It’s horrible, because you just feel powerless. It’s as though a greater force is just h

David Gower urges Stuart Broad to shrug off torments from Australia fans in the (09/2013): Stuart Broad can win over the Australian fans by taking a leaf out of David Warner’s book and laughing at abuse, says former England captain David Gower.

David Gower | Small Talk | Andy Bull (08/2013): The England cricket legend on hangover cures, his last meal on death row and flying over the Carrara Oval in a Tiger Moth Hello David ... Morning Small Talk. Apparently you've got some tips for people who want to stay up all night to watch the Ashes on Sky? Have I? That's news to me. Oh. I'll do my

A short guide to the country for townies – as requested by David Gower | Melissa (07/2013): Those who move to the country should realise it is violent and muddy, horses don't need road tax and there is no poo fairy The gamekeeper on the shooting estate where I have a small country retreat received a phone call from a panic-stricken resident of the nearby village a few weeks ago. "Is that t