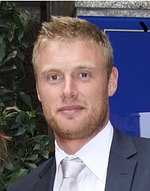 Andrew "Freddie" Flintoff MBE (born 6 December 1977) is an English television and radio presenter and former international cricketer. Flintoff played all forms of the game and was one of the sport's leading all-rounders, a fast bowler, middle-order batsman, and slip fielder. He was consistently rated by the ICC as being among the top international all-rounders in both ODI and Test cricket. More about Andrew Flintoff

Current items with a signature of Andrew Flintoff

These are the most current items with a signature of Andrew Flintoff that were listed on eBay and on other online stores - click here for more items.

Traded items with a signature of Andrew Flintoff

Most recently, these items with a signature of Andrew Flintoff were sold on eBay - click here for more items.

Andrew Flintoff eats rat's tail on Aussie version of I'm A Celebrity (03/10/15): Because there is no end to the humiliation of England cricketers.

Andrew Flintoff Quits Booze To Battle Depression (03/02/15): British cricketer Andrew Flintoff has quit drinking to help his battle with depression. The sportsman, also known by his nickname of Freddie Flintoff, made the revelation during his stint in Australian jungle-based reality Tv show I'm a Celebrity... Get Me Out of Here!

Andrew Flintoff boozed in PM's CHAIR: ''All right Freddie, you've had fun, now f (02/2015): Andrew Flintoff doesn’t seem to know his boundaries after he snuck into the Prime Minister’s office on a drunken trip to No10 to celebrate England’s 2005 Ashes win.

Ashley Giles wants Andrew Flintoff to help coach Lancashire if he doesn't play t (01/2015): Lancs CCC head coach and cricket director will sit down with Freddie Flintoff in the next few weeks to discuss the former England captain's future at the club.

Andrew Flintoff jokes he's 'open to offers' after cricketer makes brilliant pena (11/2014): Andrew Flintoff was making catches of a different kind on Sunday as the former England bowler took part in a half-time penalty shootout during the Manchester derby.

Like Andrew Flintoff, I was a male bulimic (09/2014): Bulimia doesn't just affect women - but the stigma means that men who suffer are left to cope with the illness alone

Caught out: Cricket star Andrew Flintoff fined for speeding on M60 (06/2014): The former England Test ace, who recently came out of retirement to sign a Twenty20 contract with Lancashire, was also slapped with three penalty points.

Andrew Flintoff nears Lancashire comeback after impressing for St Annes (05/2014): Andrew Flintoff wasted no time in showing Lancashire exactly what he can do as the former England all-rounder continues to fight for a spot in the Roses clash on Friday.

Andrew Flintoff extends contract to remain with Jacamo until 2016 (04/2014): Cheshire-based Freddie has been modelling the range of affordable menswear for Jacamo since 2011

Jamie Redknapp, Andrew Flintoff and James Cordon try their hand at NETBALL again (01/2014): Jamie Redknapp was an immensely gifted footballer in the midfields of Liverpool and Tottenham, but how did the Sportsmail columnist fare when he tried his hand at a very different sport?

DRS should be scrapped says Andrew Flintoff (10/2013): Former England captain Andrew Flintoff has called for the controversial decision review system to be scrapped. DRS was a hot topic of conversation during this summer’s Ashes series, particularly during the first three Tests, with a host of close calls affecting both England and Australia.

Friends Life T20 round up: Glamorgan winning streak ends and Andrew Flintoff and (07/2013): Northamptonshire ended Glamorgan's 100 per cent record with a seven-wicket win, while Lancashire beat Durham at Old Trafford, in the pick of Sunday's Friends Life Twenty20 games.

Andrew Flintoff joins BBC Radio team for Ashes Summer coverage (06/2013): The England legend will front a series of Roadshows at all the Test grounds.