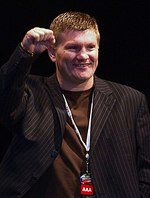 Richard John Hatton, MBE (born 6 October 1978) is a British former professional boxer who competed between 1997 and 2012, and has since worked as a boxing promoter and trainer. During his boxing career he held multiple world championships at light-welterweight and one at welterweight. Hatton is ranked by BoxRec as the best British light-welterweight of all time, the third best in Europe, and eleventh best worldwide. In 2005 he was named Fighter of the Year by The Ring magazine, the Boxing Writers Association of America, and ESPN. More about Ricky Hatton

The most expensive item with a signature of Ricky Hatton (KOSTYA TSZYU RICKY HATTON SIGNED BOXING YELLOW CLETO REYES COA MINT RARE) was sold on eBay in December 2015 for £397.23 while the cheapest item (Ricky Hatton MBE (Boxing - WBU Light-Welterweight Champion) Signed Photo Paper) found a new owner for £0.90 in March 2018. The month with the most items sold (22) was December 2012 with an average selling price of £19.32 for an autographed item of Ricky Hatton. Sold items reached their highest average selling price in October 2017 with £105.00 and the month that saw the lowest prices with £1.83 was March 2016. In average, an autographed item from Ricky Hatton is worth £17.50.

Current items with a signature of Ricky Hatton

These are the most current items with a signature of Ricky Hatton that were listed on eBay and on other online stores - click here for more items.

Traded items with a signature of Ricky Hatton

Most recently, these items with a signature of Ricky Hatton were sold on eBay - click here for more items.

Ricky Hatton hits the punch bag to stay in shape during lockdown (05/06/20): Four-time world champion Ricky Hatton showed he can still pack a punch during a lockdown gym session on Wednesday

Reliving Ricky Hatton's wild and wonderful Mancunian invasions of Las Vegas (04/12/20): Ever a man of the people. That was the key to that roaring following which it took time for the Americans to grasp as the tens of thousands hit Sin City for Mayweather fight week.

Ricky Hatton hopes big British showdown can happen (04/13/15): Former World champion Rocky Hatton believes the mega-fight between Carl Frampton and Scott Quigg has to me made.

Watch: Ricky Hatton previews Manchester City v United (04/11/15): Our friends over at BlueMoonRisingTV caught up with the Mancunian boxing legend for a pre-derby chat - watch it here!

Paul Dunne funeral: Mourners punch the air in tribute to much-loved boxing coach (03/13/15): Ex-boxers were among those lining the streets to say a final farewell to the coach who dedicated years helping youngsters into the sport across the region

Revealed: How Ricky Hatton hoped Phoenix Nights would help snare burglars who ra (02/2015): The Hitman planned to catch the thieves red-handed at the Manchester Arena after they stole his tickets to Peter Kay's hit show alongside two Rolex watches and cash

Tickets selling fast for Ricky Hatton dinner in Hartlepool (01/2015): FIGHT fans have been snapping up tickets to see a boxing legend in Hartlepool next month.

Ricky Hatton to follow in Frank Bruno’s footsteps with Hartlepool visit (11/2014): A BOXING fan says it will be a “dream come true” when one of his heroes comes to Hartlepool for a sportsman’s dinner.

Ricky Hatton parties at Milton Club for Hot Shots calender launch (10/2014): The HotShots models partied the night away with a bunch of Manchester's boxing elite on their arms

Ricky Hatton in Germany to support Paul Smith in his world title bid (09/2014): Wayne Rooney is also said to have a private jet on stand-by

Why I'm hoping Ricky Hatton beats the odds to become a world champion again (07/2014): Ricky Hatton returns to the ring this weekend when he faces former WBA world champ Vyecheslav Senchenko. David Anderson explains why he hopes the Hitman can beat the odds and win another world title

Ricky Hatton battling to keep family together after flying home from holiday alo (06/2014): Ricky, 35, has now moved out of his luxury home in Gee Cross for the second time to live in a semi nearby

Ricky Hatton leads fundraisers running for Sport Relief in the Manchester Mile (03/2014): The Hitman was one of scores of runners taking part in the city centre race

Ricky Hatton: I remember crying in the Kippax - now I believe we can beat the mi (02/2014): In his latest column for M.E.N Sport, the legendary Manchester boxer insists the Blues can win their Champions League last-16 tie.

Ricky Hatton column: Just don't call me Pellegrini (01/2014): I will be at the Etihad Stadium on Monday and I can honestly say I don’t fear Chelsea or anyone else right now – and I include Barcelona in that. City are absolutely flying.

Ricky Hatton KO'd by angry girlfriend after his four day drinking bender (11/2013): BOOZY ex-boxer Ricky Hatton has been booted out by his fed-up fiancee after going on a four-day bender. The former world champ is living with a pal and parking his £150,000 Bentley outside the £90,000 terraced house round the corner from the £2million home he shared with Jennifer Dooley.

Ricky Hatton reveals how he came close to slashing his wrists as alcohol and dru (09/2013): The former boxer admits that depression took hold after he lost his first-ever boxing match, to Floyd Mayweather in Las Vegas in 2007.

Ricky Hatton needs to ignore the siren call of the Golden Boy | Kevin Mitchell (08/2013): Oscar de la Hoya should know better than to call on the Hitman to return to boxing's brutal playground of lies The boxing ring is the ultimate playground of lies. It is there where weak smiles and sweating eyes mask trepidation, the armour needed to endure sport's cruellest examination. But fighters

Ricky Hatton posts pictures of new baby (07/2013): Ricky Hatton took to Twitter to show off his new baby girl, Fearne Grace Hatton, born on Wednesday morning. The former boxer posted the news on his official page, before posting a couple of photos of the new arrival, one with his older children Campbell and Millie.

Inside Lines: Ricky Hatton and Lennox Lewis heal rifts for greater good (06/2013): Small wonder they call boxing's theatre of war the ring. What goes around, comes around. Evidence of this comes with a fascinating double-whammy.