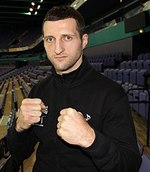 Carl Martin Froch, MBE (born 2 July 1977) is an English former professional boxer who competed from 2002 to 2014, and has since worked as a boxing analyst and commentator for Sky Sports. He held multiple super-middleweight world championships, including the WBC title twice between 2008 and 2011, the IBF title from 2012 to 2015, and the WBA (Unified) title from 2013 to 2015. At regional level he held the British, Commonwealth, and English super-middleweight titles, and won the Lonsdale Belt in 2006. As an amateur in the middleweight division, Froch won a bronze medal at the 2001 World Championships, and the ABA title twice. More about Carl Froch

The most expensive item with a signature of Carl Froch (Signed Carl Froch & George Groves Boxing Everlast Glove Display - COA) was sold on eBay in June 2014 for £349.95 while the cheapest item (Rare Hand Signed 10X8 George Groves& Carl Froch Boxing Photo, 99p Big Sale) found a new owner for £0.99 in March 2015. The month with the most items sold (14) was December 2018 with an average selling price of £33.49 for an autographed item of Carl Froch. Sold items reached their highest average selling price in April 2014 with £225.00 and the month that saw the lowest prices with £3.10 was September 2015. In average, an autographed item from Carl Froch is worth £24.33.

Current items with a signature of Carl Froch

These are the most current items with a signature of Carl Froch that were listed on eBay and on other online stores - click here for more items.

Traded items with a signature of Carl Froch

Most recently, these items with a signature of Carl Froch were sold on eBay - click here for more items.

Carl Froch opens up on the huge money he made in his boxing career (09/10/20): The multiple super-middleweight world champion, who now works for Sky Sports, was speaking on the Gary Newbon Sports Show about his wealth and his career.

Carl Froch claims he would have KNOCKED OUT Gennady Golovkin if they had ever fo (03/22/20): Froch, who retired in 2014 after knocking out George Groves, had been in talks with Golovkin over a super-fight before deciding to walk away from the sport when they fell through.

Andre Ward has no intention of transatlantic Carl Froch rematch despite WBA mand (03/2015): Andre Ward has hinted he has no plans to cross the Atlantic for a potential rematch against Carl Froch, despite the WBA ordering both fighters to face each other in the ring.

Jeff Powell's 2014 boxing awards: Carl Froch is boxer of the year for his win ov (12/2014): Carl Froch fought only once these 12 months but what a night it was. Upwards of 80,000 at Wembley saw the Nottingham Cobra deliver the punch which rang out around the world.

Chris Eubank Jnr showed what he can do against Carl Froch... so, can he cause up (11/2014): Footage has emerged of a sparring session between Chris Eubank Jnr and Carl Froch before the latter's rematch with George Groves at Wembley last May.

Four times world boxing champ Carl Froch returns to his roots for Gateshead talk (09/2014): Carl Froch whose mother Carol Weatherbed was born in Ashington, will be coming to the Lancastian Suite in Dunston, Gateshead, on October 3

Commonwealth Games 2014: David Weir draws inspiration from Carl Froch fight agai (07/2014): Paralympian competes in his first major event since London 2012 when he lines up in the T54 1500 metres

Andy Murray: I'm a huge boxing fan, so just like Carl Froch and George Groves, I (06/2014): A year ago Andy Murray went to Wimbledon as a British hopeful with the burden of ‘not since Fred Perry’ on his shoulders. He ended the 77-year hoodoo, walked away with the crown, and so this year returns with a new ch

Andre Ward open to another fight with Carl Froch as the Cobra casts George Grove (12/2013): Andre Ward has laid down the gauntlet to Carl Froch and dangled the carrot of another world title shot in front of George Groves.

Carl Froch claims defeat to George Groves could end his career (09/2013): • But predicts he will retain WBA and IBF titles by a knock-out • Super-middleweight bout sells out in 11 minutes Carl Froch has admitted that defeat by George Groves on 23 November could signal the end of his career. "This fight is potentially a massive

Exclusive - Carl Froch warns George Groves: You're nowhere near my level (07/2013): IBF and WBA super-middleweight champion says fellow Briton is not ready to face him

Carl Froch: I'll be best in the world if I beat Andre Ward (05/2013): Carl Froch has said he will retire from the ring if he can avenge his defeat to Andre Ward. The 35-year-old enjoyed the greatest victory of his 33-fight career when beating Mikkel Kessler in London last Saturday.