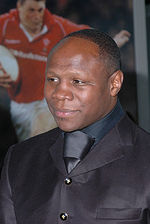 Christopher Livingstone Eubank (born 8 August 1966) is a British former professional boxer who competed from 1985 to 1998. He held the WBO middleweight and super-middleweight titles between 1990 and 1995, and is ranked by BoxRec as the third best British super-middleweight boxer of all time. More about Chris Eubank

The most expensive item with a signature of Chris Eubank (Nigel Benn & Chris Eubank Hand Signed Double Boxing Glove Display FRAMED) was sold on eBay in April 2020 for £299.95 while the cheapest item (chris eubank signed photo please read description) found a new owner for £0.38 in August 2017. The month with the most items sold (16) was August 2019 with an average selling price of £23.00 for an autographed item of Chris Eubank. Sold items reached their highest average selling price in January 2020 with £80.00 and the month that saw the lowest prices with £0.65 was February 2013. In average, an autographed item from Chris Eubank is worth £21.99.

Current items with a signature of Chris Eubank

These are the most current items with a signature of Chris Eubank that were listed on eBay and on other online stores - click here for more items.

Traded items with a signature of Chris Eubank

Most recently, these items with a signature of Chris Eubank were sold on eBay - click here for more items.

Chris Eubank Jr takes aim at 'Bottle Job' Billy Joe Saunders in extraordinary ra (07/04/20): Saunders was in talks to face the Mexican in a September bout but said he was not fully fit, and Chris Eubank Jr slammed him in a rant on Twitter, making a series of taunts against him.

Chris Eubank spent £20,000 in Paris... and then asked his promoter Barry Hearn t (06/12/20): Known for his extravagant personality, Eubank was offered a trip to Paris after a fight in 1989 against Les Wisniewski - and more than took advantage of his promoter Hearn's generosity.

Billy Joe Saunders and Chris Eubank Jnr’s war of words continues at Wembley figh (04/02/15): Hatfield’s European, Commonwealth and British champion Saunders will feature in an international middleweight contest against an opponent to be announced, whilst Eubank Jnr makes the first defence of his WBA Interim World title against tough Australian Les Sherrington.

Michael Watson fighting fit at fifty as he recalls dramatic Chris Eubank fight t (03/2015): Boxer reveals how neurosurgeon Peter Hamlyn carried out five operations on the his blood clot on the brain

Chris Eubank Jr: Don’t make me laugh says Sheffield boxer (06/2014): Dronfield’s says he’d knock Chris Eubank Jnr out if they ever fought, regardless of whether his famous father was working his corner.