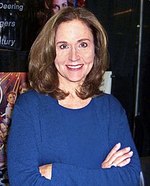 Erin Gray (born January 7, 1950) is an American actress whose roles include Colonel Wilma Deering in the science fiction television series Buck Rogers in the 25th Century and as Kate Summers-Stratton in the situation comedy Silver Spoons. More about Erin Gray

The most expensive item with a signature of Erin Gray (BUCK ROGERS personally signed 10x8 - COL WILMA DEERING - ERIN GRAY) was sold on eBay in May 2015 for £49.99 while the cheapest item (Erin Gray signed card Buck Rogers in the 25th Century autograph) found a new owner for £1.04 in September 2015. The month with the most items sold (4) was December 2014 with an average selling price of £13.99 for an autographed item of Erin Gray. Sold items reached their highest average selling price in January 2015 with £29.99 and the month that saw the lowest prices with £5.01 was November 2012. In average, an autographed item from Erin Gray is worth £14.99.

Traded items with a signature of Erin Gray

Most recently, these items with a signature of Erin Gray were sold on eBay - click here for more items.