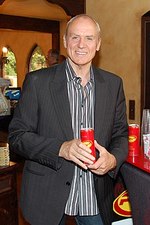 Alan Hugh Dale (born 6 May 1947) is a New Zealand actor. As a child, Dale enjoyed theatre and rugby. After retiring from the sport, he took on a number of occupations, before deciding to become a professional actor at age 27. With work limited in New Zealand, Dale moved to Australia, where he played Dr. John Forrest in The Young Doctors from 1979 to 1982. He later appeared as Jim Robinson in Neighbours, a part he played from 1985 until 1993. He left the series when he fell out with the producers over the pay he and the rest of the cast received. In 2018 it was revealed that Dale would reprise his role as Jim for one episode on 25 December, 25 years after his last appearance. More about Alan Dale

Current items with a signature of Alan Dale

These are the most current items with a signature of Alan Dale that were listed on eBay and on other online stores - click here for more items.

Traded items with a signature of Alan Dale

The most expensive item with a signature of Alan Dale (Alan Dale - Neighbours - SIGNED CAST FAN CARD - Jim Robinson) was sold in May 2019 for £28.00 while the cheapest item (Alan Dale. Signed Panflette) found a new owner for £0.99 in November 2018. The month with the most items sold (4) was January 2013 with an average selling price of £6.22 for an autographed item of Alan Dale. Sold items reached their highest average selling price in May 2019 with £28.00 and the month that saw the lowest prices with £0.99 was March 2016. In average, an autographed item from Alan Dale is worth £6.99.

Most recently, these items with a signature of Alan Dale were sold on eBay - click here for more items.