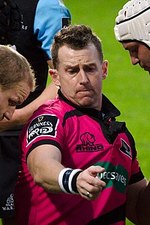 Nigel Owens, MBE (born 18 June 1971) is a Welsh international rugby union referee. He is the current world record holder for most test matches refereed and one of five professional referees at the Welsh Rugby Union, alongside Ben Whitehouse, Craig Evans, Adam Jones and Dan Jones. More about Nigel Owens

The most expensive item with a signature of Nigel Owens (PLAYER SIGNED Nigel Owens 9 Grogg SOLD OUT) was sold on eBay in January 2019 for £200.00 while the cheapest item (Nigel Owens MBE (Rugby Union Referee) Signed PR Card) found a new owner for £0.90 in May 2018. The month with the most items sold (3) was June 2014 with an average selling price of £23.00 for an autographed item of Nigel Owens. Sold items reached their highest average selling price in April 2014 with £200.00 and the month that saw the lowest prices with £3.59 was June 2018. In average, an autographed item from Nigel Owens is worth £36.00.

Traded items with a signature of Nigel Owens

Most recently, these items with a signature of Nigel Owens were sold on eBay - click here for more items.