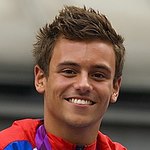 Thomas Robert Daley (born 21 May 1994) is a British diver, television personality and YouTube vlogger. He specialises in the 10-metre platform event and is a double World champion in the event; he won the 2009 FINA World Championship in the individual event at the age of 15, before regaining it in 2017. Daley was the 2012 Olympic bronze medallist in the event. More about Tom Daley

Current items with a signature of Tom Daley

These are the most current items with a signature of Tom Daley that were listed on eBay and on other online stores - click here for more items.

Traded items with a signature of Tom Daley

The most expensive item with a signature of Tom Daley (Tom Daley's autographed signed running vest Plus speedos. Diver trunks clothes.) was sold in January 2021 for £412.00 while the cheapest item (Tom Daley - Olympics Diver Signed Autograph Photo Free P&P) found a new owner for £0.30 in December 2012. The month with the most items sold (41) was September 2012 with an average selling price of £5.50 for an autographed item of Tom Daley. Sold items reached their highest average selling price in December 2014 with £213.49 and the month that saw the lowest prices with £0.99 was October 2019. In average, an autographed item from Tom Daley is worth £5.50.

Most recently, these items with a signature of Tom Daley were sold on eBay - click here for more items.

Tom Daley's new 'firework' routine fails to cause a spark at FINA World Series i (03/15/15): Tom Daley had a disappointing outing in the year's first FINA World Series event, failing to qualify for the final of the 10 metre platform in Beijing.

Tom Daley: Five steps to Rio glory (02/21/15): Swapping a demon for a firework and a roofless arena - diver Tom Daley on trying to beat the Chinese.

Tom Daley: Five steps to Rio glory (02/2015): Swapping a demon for a firework and a roofless arena - diver Tom Daley on trying to beat the Chinese.

Topless Tom Daley shows off impressive muscles as he works out on a treadmill (01/2015): Tom Daley might be a pro in the diving pool, but he's proved it carries on on dry land too. The Olympian posted a snap mid-workout today, as he showed off some seriously impressive muscles having ditched his top.

Watch Tom Daley wish you a Happy New Year and an amazing 2015! (12/2014): Tom Daley has slowly single-handedly covered most of the globe this year, and it's fairly impossible to work out exactly which hot spot he'll choose for New Year.

Tom Daley would join One Direction (11/2014): Tom Daley has confessed he would love to become the sixth member of boyband One Direction.

Tom Daley has dive 'phobia' (04/2014): Britain's Tom Daley has admitted he is now so fearful of his twist dive he is undergoing "therapy" in a bid to cure himself of what he believes is a "phobia".

Tom Daley opens up about his sexuality after his amazing 'coming out' YouTube vi (03/2014): Splash! star admits he 'didn't want to have to hide' his feelings anymore, not short of male attention

Tom Daley unsure of Splash! return (02/2014): Tom Daley is unsure if he will return to ITV's reality show Splash! for another series.

Rylan Clark: 'Tom Daley's Coming Out Was Overdone' (12/2013): Rylan Clark has spoken out over the coverage of Tom Daley's announcement that he is in a relationship with a man , saying the Olympic diver's revelation was 'overdone'. The openly gay star, who shot to fame on ' The X Factor ', says he's shocked that it's sti

Tom Daley's life has been turned into a cartoon (08/2013): Fans of British Olympic bronze medal winning diver Tom Daley can now splash out on a comic about his life.

Here's one I learned from Tom Daley: Bottlenose dolphin's acrobatic display as h (06/2013): The pod of 20 dolphins were spotted hunting their supper at Chononry Point near Fortose on the Moray Firth in Scotland.