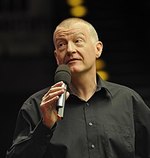 Steve Davis, OBE (born 22 August 1957) is a retired English professional snooker player from Plumstead, London. He dominated the sport during the 1980s, when he reached eight World Snooker Championship finals in nine years, won six world titles, and held the world number one ranking for seven consecutive seasons. He was the first player to make an officially recognised maximum break in professional competition (at the 1982 Classic) and also the first player to earn over £1 million in prize money. The BBC named Davis its Sports Personality of the Year in 1988, and he remains the only snooker player ever to win the award. More about Steve Davis

Current items with a signature of Steve Davis

These are the most current items with a signature of Steve Davis that were listed on eBay and on other online stores - click here for more items.

Traded items with a signature of Steve Davis

The most expensive item with a signature of Steve Davis (Steve Davis Genuine Signed Framed Snooker Ball with Certificate of Authenticity) was sold in November 2020 for £150.00 while the cheapest item (STEVE DAVIS (SNOOKER) SIGNED PUBLICITY CARD) found a new owner for £0.71 in April 2014. The month with the most items sold (16) was November 2018 with an average selling price of £6.49 for an autographed item of Steve Davis. Sold items reached their highest average selling price in October 2012 with £44.26 and the month that saw the lowest prices with £0.71 was April 2014. In average, an autographed item from Steve Davis is worth £7.63.

Most recently, these items with a signature of Steve Davis were sold on eBay - click here for more items.

Steve Davis plays down chances of Crucible return (04/08/15): Steve Davis would love to see Jimmy White and Reanne Evans light up the Crucible stage but admits his own swan song hopes look forlorn.

Rich_Sharpe published Crewe Alexandra: Steve Davis backs misfiring forwards ahea (04/08/15): STEVE Davis has backed his misfiring strikers to start finding the net again despite a goalless Easter period. The Railwaymen registered just three shots on target during their two games over Easter, a 0-0 draw with Crawley Town and a 1-0 defeat at Chesterfield, and have scored just twice in their l

Crewe Alexandra 0 Crawley Town 0: Steve Davis happy with squad... (04/03/15): STEVE Davis says he's happy with the options in his squad as they enter the final six games of the season. Davis went with an unchanged line-up for the Good Friday fixture as he looked to back up last weekend's win at Sheffield United. The Alex bench looked as strong as it has all season with Marcus

Crewe Alexandra 0 Crawley Town 0: Steve Davis felt his side did... (04/03/15): STEVE Davis felt his side did more than enough to win the game against Crawley Town. Crewe had to settle for a point despite having more of the possession against Dean Saunders's side. But the Alex boss says they will take the point and move on to Monday's trip to Chesterfield. "On a poor surface we

Rich_Sharpe published Crewe Alexandra: Steve Davis hopes Ryan Colclough can repa (03/31/15): STEVE Davis admits managing Ryan Colclough is a challenge but hopes the forward can start repaying his faith in him. Colclough was told not to train with the rest of the Alex squad on Monday after turning up late and spent the day working in the gym, just two days after his goalscoring heroics. The

Rich_Sharpe published Crewe Alexandra: Steve Davis says Jon Moran will earn valu (03/2015): NANTWICH are hoping for a boosted crowd for this week's home game as they bid to stave off relegation. Phil Parkinson's men will hope to alleviate fears of the drop when they take on bottom side Belper Town this weekend at the Weaver Stadium. The Dabbers lost narrowly to Rushall Olympic last weekend

Crewe Alexandra 0 Swindon Town 0: Steve Davis prefers to praise... (02/2015): STEVE Davis preferred to discuss his side's battling performance than the referee after a 0-0 draw with Swindon Town at Gresty Road. Referee Graham Salisbury issued 11 bookings and two red cards in a game where there was little by way of malice. It set up a grandstand finish however, with both sides

Crewe Alexandra 0 MK Dons 5: Dons were better in both boxes - Steve Davis (01/2015): STEVE Davis felt MK Dons were better in both boxes and that proved the difference at Gresty Road. The Alex were 3-0 down at the break as Devante Cole (2) and Dean Bowditch make it comfortable for the visitors. Carl Baker and Daniel Powell strikes made it five by the end to take them to the top of th

Crewe Alexandra: Break will be a crucial period - Steve Davis (12/2014): STEVE Davis admits the next 10 days will be an important period in Crewe Alexandra's season, despite not being in action. The Alex don't play again until January 10 against Gillingham but Davis faces some big decisions in the intervening period. Loan deals for Nicky Ajose, Jamie Ness, Greg Leigh and

Crewe Alexandra: Steve Davis hoping for loan signings this week (11/2014): STEVE Davis is hoping his hard work in trying to add more firepower for his Crewe Alexandra side will pay off this week. Davis spent much of last week trying to bring players in to help his shot-shy team who slipped to bottom of League One after a 4-1 defeat at Leyton Orient. Anthony Grant's strike

The Sentinel published Crewe Alexandra: Steve Davis could be without NINE player (10/2014): CREWE could be without up to nine players for this weekend's trip to Crawley, Steve Davis has revealed. Defender George Ray and midfielder Anthony Grant are definitely ruled out due to their respective suspensions picked up during Saturday's defeat to Sheffield United. Davis also confirmed at this m

Crewe Alexandra: Steve Davis critical of his players after Notts County defeat (09/2014): STEVE Davis admits he is losing patience with his underperforming players after another defeat, this time to Notts County. The 3-0 defeat made it one win in 10 league games and 26 goals conceded as their fragility was again shown in a poor second-half display. Jake Cassidy opened the scoring a minut

Crewe Alexandra: Steve Davis hopes more will follow after Marcus... (07/2014): STEVE Davis hopes more additions are to follow after signing striker Marcus Haber on a two-year deal.The 25-year-old frontman signed for the Alex yesterday and Davis is hopeful of adding more recruits in the coming weeks.Haber – released by Stevenage in the summer – has scored 13 goals in 115 games

Crewe Alexandra: Steve Davis working hard to avoid a repeat of... (06/2014): S TEVE Davis admits it has been difficult to switch off this summer after Crewe only escaped relegation by the skin of their teeth last term.But the Alex boss says preparations are well underway for the new campaign, which starts in a little over six weeks' time with a trip to newly-promoted Fleetwo

Crewe Alex: Steve Davis has the nous, ambition and drive to succeed at Gresty Ro (05/2014): A LL CHANGE at Crewe is one of the most over-used clichés, but at Gresty Road it's very apt this close season. If contract rebels Max Clayton and Byron Moore move on, just Harry Davis, Matt Tootle and Adam Dugdale will remain from Crewe Alexandra's triumphant Wembley team of 2012 . Alsager lad Lee B

Crewe Alexandra: Steve Davis to know the score on final... (04/2014): CREWE boss Steve Davis says it is imperative he keeps up to date with other scores during Saturday's relegation decider.The Alex sit one point and place above the League One drop zone ahead of the final game of the season at home to Preston.Davis says it is important he is kept up-to-date with score

Crewe Alexandra v Coventry City preview: Forget the form book, Steve Davis tells (03/2014): CREWE have been warned that relegation rivals Coventry will fight with the same spirit as the Notts County side which came, saw and conquered at Gresty Road earlier this week. The Alex were swept aside 3-1 by County on Tuesday, despite Shaun Derry's side

Stevenage 1, Crewe Alexandra 0: 'Good performance, bad result,' says Steve Davis (02/2014): STEVE Davis was left cursing a glut of missed chances as Crewe lost 1-0 at League One's bottom side Stevenage. The Alex could not recover after conceding an early goal to Francois Zoko despite mounting increasing pressure on the home goal in the second half. Mathias Pogba twice headed against the ba

Crewe Alex: Manager Steve Davis still on the lookout for a winger... (01/2014): CREWE could dip their toe into the loan market again today as Steve Davis continues his search for a winger.The Alex will not be panicked into a deal for another outfield player before the deadline passes at 11pm because the loan window for League One clubs opens again in a week's time.But it would

Crewe Alex: Bad boy Brad apologises to manager Steve Davis for his poor attitude (11/2013): OUT of favour Brad Inman has issued a personal apology to manager Steve Davis after he was left out of the team for showing a poor attitude. Now the boss has thrown down the gauntlet for Inman and fellow outcast Anthony Grant to continue their efforts in training in a bid to build bridges with not o

Crewe Alex: Manager Steve Davis looks for goalkeeper Ben Garratt... (10/2013): CREWE boss Steve Davis has been running the rule over his fringe players ahead of tomorrow's clash with Bradford City.And one name firmly in the manager's mind is goalkeeper Ben Garratt who Davis has challenged to stake a claim for the first team.Davis says he has been waiting for a knock on his off

Crewe Alex: Steve Davis takes charge of Crewe for 100th game (09/2013): S TEVE Davis will walk out as Crewe Alexandra manager for the 100th match this afternoon ... but which of the first 99 has been his most memorable?The manager rather ducks the question, insisting he could recount every kick from all his games in charge, although mention of a certain 3-0 win at Coven

Crewe Alex: Steve Davis looks to cure ills in front of goal (08/2013): S TEVE Davis insists he is not unduly worried by his side's early-season defensive frailties.The Alex have conceded 10 goals so far, but the manager has more pressing concerns on his mind as he prepares for today's trip to Swindon.Crewe have returned without reward from their two away days, and have

Steve Davis: Dario Gradi could have helped avoid under-21s... (06/2013): CREWE boss Steve Davis has urged the FA to use Dario Gradi's experience as they try to raise the standard of youth football in England.The paucity of young English talent has been exposed over the last week with England's dismal performance at the European under-21 Championships. (05/2013): STEVE Davis insists he remains unaffected by speculation which refuses to die down linking him with the Wolves job. The Crewe manager is one of four leading candidates for the vacant position at Molineux, along with Owen Coyle, Creative Commons Attribution/Share-Alike License additional terms may apply. The picture by DerHexer, Wikimedia Commons is licensed under the Creative Commons Attribution-Share Alike 4.0 International license.
Copyright 2010-2021 MemoFX LLC. All Rights Reserved. All trademarks, product names and logos appearing on the site are the property of their respective owners | Affiliate disclosure: When you click on links to various merchants on this site and make a purchase, this can result in this site earning a commission. Affiliate programs and affiliations include, but are not limited to, the eBay Partner Network. | Memorabilix in other countries: