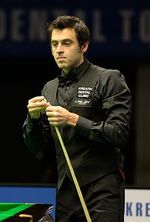 Ronald Antonio O'Sullivan OBE (born 5 December 1975) is an English professional snooker player who is the current world champion and world number one. Widely recognised as one of the most talented and accomplished players in the sport's history, he has won the World Snooker Championship seven times, a modern-era record he holds jointly with Stephen Hendry. He has won a record seven Masters and a record seven UK Championship titles for a total of 21 Triple Crown titles, the most achieved by any player. He holds the record for the most ranking titles, with 39, and has been world number one on multiple occasions. More about Ronnie O'Sullivan

Current items with a signature of Ronnie O'Sullivan

These are the most current items with a signature of Ronnie O'Sullivan that were listed on eBay and on other online stores - click here for more items.

Traded items with a signature of Ronnie O'Sullivan

The most expensive item with a signature of Ronnie O'Sullivan (Signed Snooker Cue - Champion of Champions - Ronnie O’Sullivan etc) was sold in February 2019 for £500.00 while the cheapest item (Ronnie O'Sullivan OBE (Snooker - 5 x World Champion) Signed PR Card) found a new owner for £0.90 in February 2019. The month with the most items sold (62) was December 2018 with an average selling price of £26.00 for an autographed item of Ronnie O'Sullivan. Sold items reached their highest average selling price in August 2016 with £224.99 and the month that saw the lowest prices with £1.35 was April 2015. In average, an autographed item from Ronnie O'Sullivan is worth £26.50.

Most recently, these items with a signature of Ronnie O'Sullivan were sold on eBay - click here for more items.

Ronnie O'Sullivan accepts sparring challenge from UFC star Paddy Pimblett (04/01/22): O'Sullivan was in attendance as Pimblett starred at UFC London earlier in March, as the Liverpudlian earned his fourth-straight win by submitting Mexico's Vargas in the first round.

Watch: Alan Brazil and Ronnie O'Sullivan face off at talkSPORT Towers (03/31/15): Five-time world snooker champion Ronnie 'The Rocket' O'Sullivan popped into talkSPORT Towers on Tuesday morning and took on the legendary Alan 'Bernard' Brazil in a game of pool. Check out the video above to see who won [if you haven't guessed already].

Ronnie O'Sullivan: I've achieved everything I want to achieve in snooker (03/2015): Five-time world champion Ronnie O'Sullivan claims winning 10 world titles 'wouldn't change his life much' and insists he plays the Crucible tournament 'just to get away from home'.

Ronnie O'Sullivan plays through the pain to record victory over Peter Lines (11/2014): Ronnie O’Sullivan made light of his broken ankle to clinch a 6-3 win over Peter Lines and book his place in the last 32 of the Coral UK Championship.

Williams ends 12-year wait for victory against Ronnie O'Sullivan (10/2014): Mark Williams claimed his first victory over Ronnie O'Sullivan in a ranking event for 12 years at the International Championship in China.

Matt Butler: England should rethink employing Dr Steve Peters at World Cup after (05/2014): The Inner Chimp must have worked overtime on Bank Holiday Monday. England’s football team will be hoping the pesky ape decides to take the summer off.

Ronnie O'Sullivan insists he's never played better as he eyes sixth Crucible wor (03/2014): THE SNOOKER star believes he's in the form of his life as he aims for his third successive triumph in Sheffield.

UK Snooker Championship: Big wins for Ronnie O'Sullivan and Ali Carter as Barry (11/2013): BARRY HAWKINS had to fight hard for his victory over Zhang Anda, as did Scot Graeme Dott, while Ali Carter and world champion O'Sullivan found the going good in York.

Ronnie O'Sullivan makes rivals look like robots, says Scottish snooker great Ste (10/2013): THE seven-time World Champion believes Ronnie 'The Rocket' is the only show in town and "gives people something different" in his matches.

Stephen Lee not only one guilty of match-fixing, says Ronnie O'Sullivan (09/2013): • 'I've heard there's many more players who throw matches' • World Snooker says it will demand he names names The world champion Ronnie O'Sullivan does not believe Stephen Lee is the only snooker player guilty of match-fixing. Lee, who had a career-high ranking of No5 in the world, was found guilty

Ronnie O'Sullivan: 'the Coriolanus of the Crucible' (05/2013): Clive James returns, and reveals he's been watching the snooker, AN Wilson's documentaries, and The Politician's Husband.