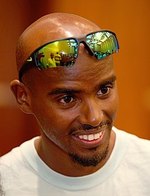 Sir Mohamed Muktar Jama Farah CBE OLY (Arabic: محمد فرح‎; born 23 March 1983) is a British long-distance runner and the most successful British track athlete in modern Olympic Games history. He is the 2012 and 2016 Olympic gold medalist in both the 5000 m and 10,000 m. Farah is the second athlete in modern Olympic Games history, after Lasse Virén, to win both the 5000 m and 10,000 m titles at successive Olympic Games. He also completed the 'distance double' at the 2013 and 2015 World Championships in Athletics. He was the second man in history, after Kenenisa Bekele, to win long-distance doubles at successive Olympics and World Championships, and the first in history to defend both distance titles in both major global competitions – a feat described as the 'quadruple-double'. Since finishing 2nd in the 10,000 metres at the 2011 World Championships in Athletics, Farah had an unbroken streak of ten global final wins (the 5000m in 2011, the 10,000m in 2017 and the double in 2012, 2013, 2015 and 2016). The streak ended in Farah's final championship track race, when he finished second to Ethiopia's Muktar Edris in the 2017 5000 metres final. In his final track race, the 2017 Diamond League Final in Zurich in August 2017, Farah gained his revenge, edging out world champion Edris to win his only IAAF Diamond League title at 5000 metres. More about Mo Farah

Current items with a signature of Mo Farah

These are the most current items with a signature of Mo Farah that were listed on eBay and on other online stores - click here for more items.

Traded items with a signature of Mo Farah

The most expensive item with a signature of Mo Farah (Rare 2012 Olympic baton Signed by pele.mo Farah. David Cameron race for hunger) was sold in April 2020 for £650.00 while the cheapest item (SIGNED MO FARAH IRREGULAR SHAPE PAGE) found a new owner for £0.50 in May 2018. The month with the most items sold (12) was September 2012 with an average selling price of £4.99 for an autographed item of Mo Farah. Sold items reached their highest average selling price in April 2020 with £650.00 and the month that saw the lowest prices with £0.99 was September 2014. In average, an autographed item from Mo Farah is worth £7.52.

Most recently, these items with a signature of Mo Farah were sold on eBay - click here for more items.

Mo Farah: my priority is London marathon over Glasgow's 2014 Games (10/15/13): Mo Farah has revealed that he does not intend to run at next year's Commonwealth Games in Glasgow.