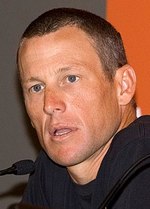 Lance Edward Armstrong (né Gunderson; September 18, 1971) is an American former professional road racing cyclist. Regarded as a sports icon for winning the Tour de France seven consecutive times from 1999 to 2005, Armstrong's reputation was tarnished by a doping scandal that led to him being stripped of his Tour de France titles. More about Lance Armstrong

Current items with a signature of Lance Armstrong

These are the most current items with a signature of Lance Armstrong that were listed on eBay and on other online stores - click here for more items.

Traded items with a signature of Lance Armstrong

Most recently, these items with a signature of Lance Armstrong were sold on eBay - click here for more items.

Lance Armstrong Does The Right Thing — Pleads Guilty To Charges In Hit & Run Cas (02/2015): The truth will set you free, Lance Armstrong! On Wednesday, Lance pled guilty to charges stemming from a December incident in Aspen — essentially, the cyclist crashed into two parked cars, a mistake he tried to pawn off on his girlfriend. [ Related: Lance Has Been Fined For Using Performance Enhanci

Column: Russia is athletics' Lance Armstrong case (12/2014): What should be a cherished, career-best memory for Netherlands runner Yvonne Hak — winning a silver medal at the 2010 European Championships — now just feels "strange and frustrating."

Lance Armstrong: I Would Still Be Lying About Doping If I Wasn't Found Out (08/2014): Lance Armstrong has admitted he would still be lying about his doping past if he wasn't so spectacularly exposed two years ago. Armstrong is serving a lifetime ban from cycling after the United States Anti-Doping Agency report in 2012 discovered he and his team ran the "most sophisticated doping pro

Judge rules against Lance Armstrong (06/2014): A US judge has refused to dismiss the government's lawsuit against disgraced cyclist Lance Armstrong and associates for alleged doping and use of banned performance-enhancing techniques.

Court denies Lance Armstrong appeal (05/2014): The Texas Supreme Court has denied Lance Armstrong's request to block a Dallas company's attempts to recover about 12 million US dollars in performance bonuses it paid the cyclist during his career.

Lance Armstrong would need 'a miracle' to get lifetime ban overturned (04/2014): • Wada president John Fahey dismisses American's claims • 'He did what he did, we all know what that is,' says Fahey The disgraced Tour de France winner Lance Armstrong would need "something close to a miracle" to get his lifetime ban from cycling re-examined, the World Anti-Doping Agency president,

Dallas sports insurer wants prize money back from Lance Armstrong (02/2014): DALLAS (Reuters) - Lawyers for Lance Armstrong went to court in Dallas on Friday, to try to block a sports insurance company from re-opening an arbitration decision forcing the firm to pay $12 million in bonuses to the disgraced cyclist.

The Armstrong Lie: Alex Gibney's documentary shows psychotically righteous Lance (01/2014): Lance Armstrong likes to gamble. The seven-times Tour de France "winner", dogged by rumours that he'd doped his way to success, wanted a documentary-maker to cover his 2009 comeback. The man he chose for the job was award-winning, anti-Establishment purist Alex Gibney. Armstrong was betting that Gib

Hunting Lance Armstrong was the highlight of career - David Walsh (11/2013): Marge Simpson may not be everyone’s idea of a philosopher, but the blue-haired cartoon mother-of-three was David Walsh’s “guiding light” during his pursuit of the truth behind Lance Armstrong’s seven successive Tour de France wins.

Sheryl Crow: 'I hate questions about ex Lance Armstrong' (09/2013): Rocker SHERYL CROW is urging reporters and media folk to stop asking her about her former lover LANCE ARMSTRONG's drug-use scandal - because she is tired of responding.

Shamed cycling cheat Lance Armstrong: Drugs are essential to secure a victory in (06/2013): ARMSTRONG slurred winners including British champion Sir Bradley Wiggins on the eve of the staging of the famous bike road race.