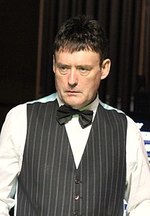 James Warren White, MBE (born 2 May 1962) is an English senior snooker player who has won three seniors World titles, and is the reigning champion. Nicknamed "The Whirlwind" because of his fluid, attacking style of play and popularly referred to as the "People's Champion", White is the 1980 World Amateur Champion, 2009 Six-red World champion, 3 time World Seniors Champion (2010, 2019, 2020), 2019 Seniors 6-Red World Champion and 1984 World Doubles champion with Alex Higgins. More about Jimmy White

Current items with a signature of Jimmy White

These are the most current items with a signature of Jimmy White that were listed on eBay and on other online stores - click here for more items.

Traded items with a signature of Jimmy White

The most expensive item with a signature of Jimmy White (Jimmy White Signed Snooker Cue. Framed) was sold in August 2020 for £239.99 while the cheapest item (1998 Autographed Embassy Snooker Classic Ticket - Steve Davis v Jimmy White) found a new owner for £0.50 in October 2019. The month with the most items sold (17) was April 2020 with an average selling price of £14.99 for an autographed item of Jimmy White. Sold items reached their highest average selling price in October 2017 with £144.99 and the month that saw the lowest prices with £0.99 was March 2014. In average, an autographed item from Jimmy White is worth £11.60.

Most recently, these items with a signature of Jimmy White were sold on eBay - click here for more items.

Top 16 set for Chinese influx, says Jimmy White (02/10/15): World number three Ding Junhui is the sole Chinese player in the top 16 at the moment but Xiao Guodang (19) and Liang Wenbo (20) are knocking on the door. The drop-off to the next Chinese player is vast, with Yu Delu checking in at number 50, but White sees that all changing.

Jimmy White on a life fuelled by drugs, lunch with Ronnie Kray and talking snook (11/27/14): It is 9am and Jimmy White walks into a bog-standard central London hotel with a cue box. ‘Look, I wouldn’t have had this with me in the old days,’ he says.

Must listen radio! Jimmy White on drugs, bribes and his snooker career (11/14/14): Legendary snooker player Jimmy White joined the Sports Bar to discuss his colourful career in the game. Among other topics, the 52-year-old spoke about his drug addictions, being offered bribes and promoted his new book, 'Second Wind'.

Jimmy White: If I didnt think I could still win the world title, Id stop playing (11/2014): The Whirlwind was the biggest snooker talent of his generation and an equally prodigious party animal. Now he admits he got addicted to crack. So why did he press the self-destruct button? If Id read Jimmy Whites new autobiography before setting off to Leicester to meet him, I would have known to pa

The Bristol Post published Reader's letter: Judd Trump could be labelled as new (05/2014): AFTER his latest exit at the Sheffield World Championship is Bristol snooker star Judd Trump about to be labelled as being the modern day version of that nearly man of the baize Jimmy White?White, the likeable "people's champion" of the eighties and ni

Stuart Bingham beats Jimmy White despite wife's car-crash distraction (04/2014): • World No10 struggled for focus at UK Championship • 'Everything's all right but I was a bit worried about that' Stuart Bingham revealed after a scrappy UK Championship win over Jimmy White that he was distracted by a car accident on Saturday involving his wife, Michelle. The world No10 assured rep

Jimmy White on Ronnie O’Sullivan, his snooker future and visit to Norwich (02/2014): Jimmy White on action a the UK Championships in December - and he will be in Norwich later this month. Britain’s youngest might need reminding who Jimmy White is – but the exercise will always be worthwhile because the numbers stack up.

Life of Eric Bristow... why I carried a claw hammer, I was never a 'choker' like (12/2013): Eric 'The Crafty Cockney' Bristow, who helped make darts popular with his larger than life personality, has spoken about his career in a revealing new television interview.