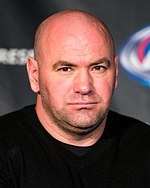 Dana Frederick White Jr. (born July 28, 1969) is an American who serves as president of the Ultimate Fighting Championship, a global mixed martial arts organization. In August 2019, White's net worth was estimated at $500 million. More about Dana White

Current items with a signature of Dana White

These are the most current items with a signature of Dana White that were listed on eBay and on other online stores - click here for more items.

Traded items with a signature of Dana White

The most expensive item with a signature of Dana White (Dana White Signed Photo Large Framed Autograph UFC President Display + COA) was sold in September 2020 for £129.99 while the cheapest item (Ufc Programme Signed Dana White) found a new owner for £1.00 in April 2015. The month with the most items sold (2) was April 2015 with an average selling price of £2.11 for an autographed item of Dana White. Sold items reached their highest average selling price in February 2013 with £75.00 and the month that saw the lowest prices with £2.11 was April 2015. In average, an autographed item from Dana White is worth £7.51.

Most recently, these items with a signature of Dana White were sold on eBay - click here for more items.

Dana White admits stripping Charles Oliveira of UFC title for missing weight is (05/08/22): Dana White has admitted the weight-cutting fiasco that led to Charles Oliveira being stripped of his title is a 'nightmare'.  Oliveira thought he was on weight the night before having to hit 155-pounds.

UFC 276 plans LEAKED with Nate Diaz vs Khamzat Chimaev on matchboards (05/04/22): Footage from a podcast has revealed potential upcoming UFC fights for later this year after inadvertently showing the background of Dana White's office.

UFC face problem with top stars Francis Ngannou, Nate Diaz and Israel Adesanya c (01/2022): This year, the UFC is facing a potential crisis. The kind of roadblock Dana White and Co haven't had to deal with since the company was in its infancy.

Dana White 'will make fight between Henry Cejudo and Alexander Volkanovski', say (11/2021): Henry Cejudo is close to agreeing a comeback fight that would see him attempt to become the first three-weight UFC champion in history. His manager is hopeful ahead of negotiations.

UFC 267: Khamzat Chimaev talks to Dana White while holding his rival in MID-AIR (10/2021): The Swede has set tongues wagging since his debut, with fans and pundits earmarking the welterweight - who has been hit just once during his UFC career - as a future champion.

UFC president Dana White 'will meet Gable Steveson in Las Vegas' despite WWE int (08/2021): Steveson, 21, is believed to have weighed up competing in mixed martial arts, and must now make his choice just a month on from claiming a sensational triumph for Team USA in Tokyo.

Dana White reveals UFC's Fight Island 'is not going away' and will be 'EVEN BIGG (06/2021): Last summer the UFC supremo launched the concept to ensure the sport continued during the pandemic and staged events on Abu Dhabi's Yas Island.

Jake Paul blasts Dana White and tells UFC chief to pay 'fair share' as their bit (04/2021): White questioned the truth behind Paul's claim that his fight with Ben Askren garnered 1.5m PPV buys, and the YouTuber has hit back, calling on the UFC chief to better pay his fighters.

Which UFC champion is vulnerable to the challengers snapping at their heels? (03/2021): It has always been tough at the top. From the moment Dana White wraps a UFC belt around a fighter's waist, the hunter becomes the hunted. So who is going to lose their title next?

Dana White told to 'let Khabib enjoy his retirement' and allow the 'lightweight (02/2021): Khabib announced his retirement after defeating Justin Gaethje at UFC 254. However, White is eager to see Khabib return to competition to achieve 30-0. Kevin Lee believes White should leave him be.

Georges St-Pierre says Dana White 'knows where to reach me' over Khabib Nurmagom (01/2021): The Canadian (left) has been a target of Khabib Nurmagomedov's (inset) for some time and has called on UFC chief Dana White (right) to contact him should a fight be on the cards.

Dana White insists Conor McGregor and Khabib Nurmagomedov would have rematch 'in (12/2020): White has refused to strip the undefeated fighter Khabib Nurmagomedov of his title in the hope he will reverse his decision to retire and plans to discuss the possibility with him next month.

Deiveson Figueiredo handed $50,000 in CASH by Dana White after UFC president adm (11/2020): After the event, the organisation handed out its customary post-fight bonuses but despite his explosive finish to the fight, Figueiredo did not receive an extra pay-packet - until now.

UFC president Dana White thinks Khabib Nurmagomedov will be back for one more fi (10/2020): Nurmagomedov surprisingly announced his retirement from mixed martial arts following his brilliant submission victory over Justin Gaethje at UFC 254 on Saturday night..

UFC boss Dana White reveals Khabib will fight Justin Gaethje for UFC lightweight (07/2020): The UFC president has revealed that the lightweight champion, who had been rumoured to be retiring following the death of his father, will return to the Octagon to face the interim champion.

Dana White gives fans a glimpse of Fight Island in Abu Dhabi as UFC chief shares (06/2020): The image showed the octagon being prepared for UFC 251, which is set to take place in July on a beach in Abu Dhabi.

UFC chief Dana White reveals there will be 'three or four' events on Fight Islan (05/2020): The location of Fight Island has been steeped in mystery for some time since White unveiled the ambitious project, with the wherabouts of the location currently unknown.

'Who gives a f***?': Mark Hunt launches extraordinary attack on Dana White as he (04/2020): Mark Hunt has reignited his feud with Dana White by launching a foul-mouthed attack on the UFC president and the way he runs the mixed martial arts company.

Khabib and Ferguson finally meeting was supposed to be a celebration...it deserv (03/2020): Why, in the middle of a global pandemic is Dana White pulling out all the stops to stage Khabib Nurmagomedov vs Tony Ferguson in some far flung corner of the world.

Khabib Nurmagomedov says '99 per cent' of fans know he would beat Conor McGregor (02/2020): McGregor returned to MMA in spectacular style last month, beating Donald Cerrone inside one round and according to Dana White wants a rematch with Khabib - but the Russian is not so keen.

Conor McGregor is handed £50k 'Performance of the Night' bonus by UFC chief Dana (01/2020): The former two-weight champion dismantled his opponent in just 40 seconds in his first bout since October 2018.

Conor McGregor targeting Jorge Masvidal fight is a 'bad idea', says UFC boss Dan (12/2019): They have exchanged heated messages on social media over the past few months and hinted at a future clash, but White believes it would be a 'bad idea' for McGregor to take that fight.

Khabib Nurmagomedov in talks to face Tony Ferguson in UFC blockbuster (11/2019): Dana White confirmed he is hoping the two will finally meet at the fourth time of asking, while teasing the return of Conor McGregor to the octagon in 2020.