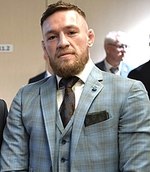 Conor Anthony McGregor (Irish: Conchúr Antóin Mac Gréagóir; born 14 July 1988) is an Irish professional mixed martial artist and boxer. He is a former Ultimate Fighting Championship (UFC) featherweight and lightweight double-champion. As of 25 January 2021, he is #6 in the UFC lightweight rankings, and as of March 23, 2021 he is #15 in the UFC men's pound-for-pound rankings. More about Conor McGregor

Current items with a signature of Conor McGregor

These are the most current items with a signature of Conor McGregor that were listed on eBay and on other online stores - click here for more items.

Traded items with a signature of Conor McGregor

The most expensive item with a signature of Conor McGregor (Framed Conor Mcgregor And Floyd Mayweather Signed Boxing Glove UFC RARE COA) was sold in July 2018 for £1199.99 while the cheapest item (Conor Mcgregor Signed Official UFC Glove) found a new owner for £0.01 in May 2019. The month with the most items sold (23) was April 2018 with an average selling price of £75.00 for an autographed item of Conor McGregor. Sold items reached their highest average selling price in September 2020 with £199.99 and the month that saw the lowest prices with £2.81 was April 2016. In average, an autographed item from Conor McGregor is worth £46.00.

Most recently, these items with a signature of Conor McGregor were sold on eBay - click here for more items.

How Conor McGregor went from being on the dole to topping Forbes Athlete Rich Li (05/13/21): Conor McGregor can now kick back on his speed boat, named the '188' in reference to the dole in Ireland, and think about where it all went so right. He is now the richest athlete in the world.

Colby Covington brands 'joke' Conor McGregor 'the laughing stock of the MMA comm (05/05/21): McGregor, 32, has teased a move up to 170 pounds to take on the all-conquering Nigerian Nightmare, who he has accused of 'copying' his one-liners and fighting style.

Dustin Poirier expresses regret over $500,000 charity donation row with Conor Mc (04/29/21): Tempers flared between the lightweight rivals earlier this month when Poirier took to Twitter to accuse McGregor of 'ghosting' him and failing to deliver on the huge $500,000 donation.

Conor McGregor's trilogy fight with Dustin Poirier 'set for UFC 264 on July 10' (03/2021): Talks over a blockbuster third fight between the pair have been ongoing since Poirier ruined McGregor's latest comeback with a shock KO win in January - and a deal is now close.

Dustin Poirier reveals he wants trilogy bout with Conor McGregor to happen in Ju (02/2021): The 'Diamond' secured a stunning second-round knock-out win over the Irishman at UFC 257 and while Poirier will go in as a heavy favourite, he insisted that will hold no bearing on the next.

Dustin Poirier to auction off gear from UFC 257 win over Conor McGregor (01/2021): The UFC star bagged the biggest victory of his career with the second-round win over his rival, earning revenge for a prior loss to McGregor at UFC 178 in 2014.

Khabib Nurmagomedov reveals his cousin is set to make his UFC debut on 'Fight Is (12/2020): Unbeaten superstar Khabib revealed that his cousin's first fight for the promotion will take place at UFC 257, on the undercard for Conor McGregor vs Dustin Poirier, on January 23.

YouTube star Jake Paul says he wants to fight Conor McGregor after knocking out (11/2020): The 23-year-old recorded victory with a brutal right hook in the second round - and then bullishly issued a challenge to UFC superstar McGregor. He insisted he takes his boxing career 'seriously'.

'Lightweight Division incoming': Conor McGregor teases UFC return fight class ag (10/2020): The Irishman has hinted that his UFC comeback fight against Dustin Poirier next year could be a lightweight clash set at 155lbs. The pair will face off on January 23 next year in Las Vegas.

Conor McGregor slams 'borderline criminal' decision from UFC to hold him back (09/2020): Conor McGregor's crusade agains the UFC for refusing him fights has continued with an appeal to Disney CEO Bob Chapek. Disney own ESPN who are the UFC's broadcast partners.

Conor McGregor's coach reveals his rage after the Irishman floored Aisling Daly (08/2020): Conor McGregor and John Kavanagh formed one of the most formidable fighter-coach partnerships in UFC history. But Kavanagh revealed a time where he lost his temper with the Irishman.

UFC star Khamzat Chimaev reveals he flew to Ireland to beat up Conor McGregor fo (07/2020): The Swedish UFC welterweight is regarded as one of the brightest talents on the roster and showcased his exciting potential with two dominant performances at Fight Island this month.

Donald 'Cowboy' Cerrone admits devastating TKO defeat by Conor McGregor left him (04/2020): Donald Cerrone has admitted that his 'brain was rattled' after the 40-second obliteration by Conor McGregor in January. The UFC 246 event saw 'Cowboy' wilt early in the first round.

Conor McGregor will make his UFC return against Donald Cerrone on January 18 (11/2019): White confirmed on Thursday that McGregor has agreed to the welterweight bout at UFC 246. It will be his first fight since his defeat to Khabib Nurmagomedov last October.

Khabib Nurmagomedov responds to Conor McGregor after Irishman labels him a 'b*** (01/2019): McGregor shared an old video of himself having a confrontation with former sparring partner Paulie Malignaggi, writing a lengthy caption about his frustration with fighters 'b*******' nowadays.