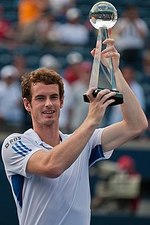 Sir Andrew Barron Murray OBE (born 15 May 1987) is a British professional tennis player from Scotland. He has been ranked world No. 1 by the Association of Tennis Professionals (ATP) for 41 weeks, and finished as the year-end No. 1 in 2016. He has won three Grand Slam singles titles, including two at Wimbledon, and has reached eleven major finals. Murray was ranked in the top 10 for all but one month from July 2008 through October 2017, and finished no lower than No. 4 in eight of the nine year-end rankings during that span. Murray has won 46 ATP singles titles, including 14 ATP Masters 1000 events. More about Andy Murray

Current items with a signature of Andy Murray

These are the most current items with a signature of Andy Murray that were listed on eBay and on other online stores - click here for more items.

Traded items with a signature of Andy Murray

The most expensive item with a signature of Andy Murray (Tennis Player Andy Murray Signed Celtic Home Shirt, 2015-16) was sold in September 2015 for £7000.00 while the cheapest item (A Hand Signed Tennis Card Signed By (Andy Murray)) found a new owner for £0.99 in June 2020. The month with the most items sold (13) was July 2013 with an average selling price of £22.00 for an autographed item of Andy Murray. Sold items reached their highest average selling price in January 2018 with £450.00 and the month that saw the lowest prices with £1.49 was December 2017. In average, an autographed item from Andy Murray is worth £8.00.

Most recently, these items with a signature of Andy Murray were sold on eBay - click here for more items.

Andy Murray 'Very' Excited As Wedding Nears (04/10/15): Andy Murray has shared his excitement as he gears up for his wedding to long-time girlfriend Kim Sears in his home town. As the tennis star left the rehearsal at the Dunblane Cathedral with his bride-to-be on Friday, he was asked if he was excited about the big day. The Wimbledon and US Open champio

Andy Murray's new mother-in-law Leonore Sears is set to steal the wedding day li (04/10/15): South African-born Leonore Sears, 53, pictured centre, has long been admired on the tennis circuit by gentleman of a certain vintage, and is certain to look stunning at the Dunblane wedding.

Andy Murray set to wed in home town (04/10/15): Tennis star Andy Murray is to marry his long-time girlfriend Kim Sears in his home town of Dunblane.

Andy Murray 'Very' Excited As Wedding Nears (04/2015): Andy Murray has shared his excitement as he gears up for his wedding to long-time girlfriend Kim Sears in his home town. As the tennis star left the rehearsal at the Dunblane Cathedral with his bride-to-be on Friday, he was asked if he was excited about the big day. The Wimbledon and US Open champio

Andy Murray: Beating Novak Djokovic will be agony but no pain, no gain! (03/2015): ANDY MURRAY is aiming to end his run of defeats to the Serbian ace by securing his first victory against Novak since 2013 when they meet at Indian Wells.

Australian Open: Andy Murray v João Sousa - as it happened (01/2015): Andy Murray progresses to the 4th round of the Australian Open Murray beats Joao Sousa of Portugal 6-1, 6-1, 7-5 5.53pm AEST The postmortem “It was a good match,” says Murray, who says his body is feeling good. “If you can conserve as much energy as possible it’s always good.” This one stretched bey

Andy Murray Has Always Struggled To Conceal His Patriotic Streak (09/2014): During a Twitter Q&A earlier this year, Andy Murray tweeted he was engaged to girlfriend Kim Sears... before he pulled the rug from beneath everyone's feet. It was an April fools joke . His "Yes" campaign endorsement was no joke, though. "Huge day for Scotland today! no campaign negativity last few

Andy Murray must repair cracks in his backroom team amid Wimbledon fallout (07/2014): MIKE DICKSON: Andy Murray's trusted lieutenant Dani Vallverdu is believed to have considered his future with the deposed Wimbledon champion in the wake of Wednesday's quarter final letdown.

Andy Murray's mother Judy's lucrative leap into the limelight (06/2014): Andy Murray may have cruised through the opening rounds of Wimbledon as reigning champion — but it’s his mother Judy (pictured) whose business deals could make her more than £150,000 in a year.

Andy Murray aware he faces real threat from experienced German rival Kohlschreib (05/2014): Andy Murray will be wary of two things when he plays Philipp Kohlschreiber at the French Open today:

Cor slimey, it's Andy Murray (03/2014): HE has been perceived as having a dour personality and criticised for rarely cracking a smile.

Andy Murray falls to Marin Cilic at World Tennis Tournament (02/2014): • Second seed last only 71 minutes in Rotterdam • Frustrated Murray loses quarter-final 6-3, 6-4 Britain's Andy Murray bowed out of the World Tennis Tournament in Rotterdam after a straight-sets defeat to Marin Cilic on Friday. Murray, the world No6, was broken on his first service game and never re

Andy Murray would be mad to miss the BBC's Sports Personality of the Year, says (11/2013): Tony McCoy: SPOTY is a night to cherish and I am honoured to go there once more, especially in such a top-class field.

US Open: Impressive Andy Murray too good for Leonardo Mayer (08/2013): Andy Murray's defence of his US Open title is gathering pace. The 26-year-old Scot went through to the third round here thanks to an entertaining 7-5, 6-1, 3-6, 6-1 victory over Argentina's Leonardo Mayer. With the exception of a poor third set, Murray played with power and panache to secure his pla

Wimbledon 2013: Andy Murray sails into the second week full of optimism (06/2013): Come rain or shine, under a roof or in the open air, Andy Murray’s progress is relentless. The 26-year-old Scot last night secured his customary place in the second week here when he gave another master class in the art of grass-court tennis, beating Spain’s Tommy Robredo 6-2, 6-4, 7-5 to secure his