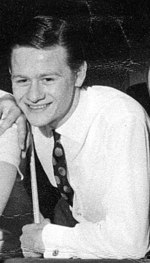 Alexander Gordon Higgins (18 March 1949 – 24 July 2010) was a Northern Irish professional snooker player who is remembered as one of the most iconic figures in the game. Nicknamed Hurricane Higgins because of his fast play, he was World Champion in 1972 and 1982, and runner-up in 1976 and 1980. He won the UK Championship in 1983 and the Masters in 1978 and 1981, making him one of eleven players to have completed snooker's Triple Crown. He was also World Doubles champion with Jimmy White in 1984, and won the World Cup three times with the All-Ireland team. More about Alex Higgins

Current items with a signature of Alex Higgins

These are the most current items with a signature of Alex Higgins that were listed on eBay and on other online stores - click here for more items.

Traded items with a signature of Alex Higgins

The most expensive item with a signature of Alex Higgins (Alex Higgins Signed Snooker Cue, Professionally Framed! Very Rare Piece) was sold in January 2021 for £540.00 while the cheapest item (ALEX HIGGINS Signed Autograph PHOTO Fan Gift Signature Print World SNOOKER) found a new owner for £0.99 in August 2020. The month with the most items sold (12) was January 2021 with an average selling price of £18.95 for an autographed item of Alex Higgins. Sold items reached their highest average selling price in December 2017 with £270.00 and the month that saw the lowest prices with £3.75 was January 2016. In average, an autographed item from Alex Higgins is worth £26.85.

Most recently, these items with a signature of Alex Higgins were sold on eBay - click here for more items.

Snooker legend Alex Higgins branded 'a poor father' in court as his son is jaile (11/13/14): Jordan Higgins, 31, was high on drink and drugs when he raided Cheadle News and stole cigarettes worth £1,500

‘Jimmy has always been a wild boy in the the mold of Alex Higgins’ – Ken Doherty (11/03/14): Stories about White’s drug abuse were revealed on Monday.

Alex Higgins (10/23/14): A letter of apology from snooker legend Alex Higgins to a press officer he thumped in 1990 is expected to fetch £2,000 at auction in Derby. MY father and I were great snooker fans and spent countless hours watching the stars of the green baize in the 70s and 80s.