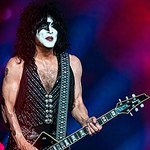 Paul Stanley (born Stanley Bert Eisen; January 20, 1952) is an American singer, songwriter and painter, best known for being the rhythm guitarist and co-lead vocalist of the rock band Kiss. He is the writer or co-writer of many of the band's highest-charting hits. Stanley established The Starchild character for his Kiss persona and is known for his distinctive wide ranging voice. More about Paul Stanley

The most expensive item with a signature of Paul Stanley (SIGNED PAUL STANLEY PRINT FROM SCARLET PAGE'S RESONATORS COLLECTION) was sold on eBay in March 2014 for £499.00 while the cheapest item (KISS ROCK BAND PAUL STANLEY SIGNED 10x8 INCH LAB PRINTED PHOTO) found a new owner for £4.99 in September 2016. The month with the most items sold (4) was January 2020 with an average selling price of £34.98 for an autographed item of Paul Stanley. Sold items reached their highest average selling price in March 2014 with £499.00 and the month that saw the lowest prices with £4.99 was April 2016. In average, an autographed item from Paul Stanley is worth £15.25.

Traded items with a signature of Paul Stanley

Most recently, these items with a signature of Paul Stanley were sold on eBay - click here for more items.