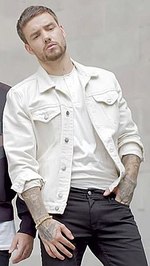 Liam James Payne (born 29 August 1993) is an English singer and songwriter. He rose to fame as a member of the boy band One Direction. Payne made his debut as a singer in 2008 when he auditioned for the British television series The X Factor. After being eliminated in the competition, he auditioned again in 2010 and was put into a group with four other contestants to form One Direction, which went on to become one of the best-selling boy bands of all time. Payne worked with other producers under the monikers "Big Payno" and "Payno" creating remixes for songs by his group and Cheryl. More about Liam Payne

Current items with a signature of Liam Payne

These are the most current items with a signature of Liam Payne that were listed on eBay and on other online stores - click here for more items.

Traded items with a signature of Liam Payne

The most expensive item with a signature of Liam Payne (LIAM PAYNE: The Prototype - Signed - adidas Samba Size UK 9.5) was sold in for £870.00 while the cheapest item (One Direction Liam Payne signed. OFFICIAL TOUR MERCHANDISE.) found a new owner for £0.06 in July 2013. The month with the most items sold (43) was November 2012 with an average selling price of £4.20 for an autographed item of Liam Payne. Sold items reached their highest average selling price in August 2018 with £768.00 and the month that saw the lowest prices with £0.06 was July 2013. In average, an autographed item from Liam Payne is worth £5.50.

Most recently, these items with a signature of Liam Payne were sold on eBay - click here for more items.

One Direction's Liam Payne and Niall Horan arrive back in London (04/06/15): The One Direction boys looked relieved to be back on home turf as they touched down at London's Heathrow Airport on Sunday.

Fans are the 'heroes', says 1D's Liam Payne after Zayn departure (03/29/15): Liam thanked fans for sticking with the band and “not thinking it’s finished”.

Liam Payne shares message to One Direction fans about Zayn Malik (03/27/15): The 21-year-old singer took to Twitter to post an emotional message to fans about how shocked and 'deeply saddened' the boys are by Zayn's decision.

Liam Payne: Zayn departure doesn't mean end for One Direction (03/27/15): One Direction’s remaining members have thanked fans for their support and promised they will go on making music.

Liam Payne's 'worst' week (03/26/15): Liam Payne has admitted this last week has been the ''worst time'' for him and his One Direction bandmates - Niall Horan, Louis Tomlinson and Harry Styles - following Zayn Malik's departure from the group.

One Direction's Liam Payne Laughs Off Newspaper That Confuses Him For David Beck (02/2015): Apparently Liam REALLY LOOKS LIKE David in the snap. D'OH.

The Voice: Kim Alvord wows Sir Tom as 1D fans check out Liam Payne's cousin (01/2015): Ross Harris and Kim Alvord both have A-list celebrity connections – but could they make the grade on The Voice?

Liam Payne Denies Faking Smile For Fans (11/2014): One Direction star Liam Payne has denied faking smiles for fans as he posed for pictures with them at the Australian Radio Industry Association ( Aria ) awards on Wednesday (26Nov14).

One Direction's Liam Payne Admits X Factor 2014 Scares Him And He Can't Watch It (10/2014): The pop superstar finds it difficult to actually watch the show that he was once on!

Liam Payne Gets Even Tighter With The Duck Dynasty Clan! By Shooting Guns With T (09/2014): WAY back in January of 2014,  One Direction star Liam Payne caused quite a bit of controversy among fans by showing some support for Duck Dynasty.  And though he defended himself as not supporting EVERYTHING they said, he specifically applauded the Robertsons' "family values" right in the midst of t

Liam Payne is made a Lord for his Birthday – Happy Birthday, Lord Payno! (08/2014): When you’re in one of the world’s most famous bands, you must be pretty difficult to buy for when it comes to Birthday’s. Especially when it’s your 21st. But, someone – called Ruth – has surpassed themselves and has given...

Liam Payne's naked selfie, and four other One Direction mishaps that are better (07/2014): Yes, it’s that time of the week again - one member of the boyband One Direction has made the headlines in a scandalous fashion, although this time it's a bit more light-hearted than some of the...

Liam Payne apologises for One Direction stars over (05/2014): Liam Payne has apologised on behalf of his One Direction bandmates after two of the singers were caught on video appearing to be smoking marijuana earlier this week.

OMG! One Direction's Liam Payne 'survives on chocolate bars and coffee' to get f (02/2014): The singer wants sculpted abs

One Direction's Liam Payne Is All Smiles After Passing Driving Test (01/2014): Wonder Where He Will Drive First?

One Direction's Liam Payne Cosies Up To An Unexpected Someone Over Christmas! (12/2013): We Hope There Wasn't Any Kissing!

Liam Payne refuses 20th birthday gifts in favour of charity donations (08/2013): Liam Payne didn't want to receive gifts for his 20th birthday.The One Direction star - who celebrated the end of his teenage years on Thursday...

Liam Payne's mate covers him in shattoos. How they laughed. (07/2013): One Direction have gone a bit nuts on the tattoo front lately plastering themselves in ink faster than we can say ‘you’re going to regret that’. From joker Louis’ ‘oops’ tattooed on his arm to Harry’s cryptic writing (below) the boys...