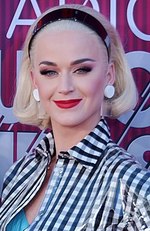 Katheryn Elizabeth Hudson (born October 25, 1984), known professionally as Katy Perry, is an American singer, songwriter and television judge. After singing in church during her childhood, she pursued a career in gospel music as a teenager. Perry signed with Red Hill Records and released her debut studio album Katy Hudson under her birth name in 2001, which was commercially unsuccessful. After Red Hill ceased operations, she moved to Los Angeles the following year to venture into secular music, adopting the stage name "Katy Perry" from her mother's maiden name. Perry subsequently began working with producers Glen Ballard, Dr. Luke, and Max Martin on an album that remains unreleased. After being dropped by The Island Def Jam Music Group and Columbia Records, she signed a recording contract with Capitol Records in April 2007. More about Katy Perry

Current items with a signature of Katy Perry

These are the most current items with a signature of Katy Perry that were listed on eBay and on other online stores - click here for more items.

Traded items with a signature of Katy Perry

The most expensive item with a signature of Katy Perry (Katy perry smile 6 picture disc set plus signed art card witness teenage dream) was sold in June 2021 for £380.00 while the cheapest item (Katy Perry Autograph Signed Memorabilia) found a new owner for £0.99 in September 2019. The month with the most items sold (56) was September 2020 with an average selling price of £29.99 for an autographed item of Katy Perry. Sold items reached their highest average selling price in February 2015 with £75.00 and the month that saw the lowest prices with £3.79 was June 2018. In average, an autographed item from Katy Perry is worth £22.10.

Most recently, these items with a signature of Katy Perry were sold on eBay - click here for more items.

Sleepy Katy Perry (04/12/15): Katy Perry has admitted she likes to sleep a lot and says she regularly finds her day starting at noon and ending at 3am.

Katy Perry's Van Breaks Down En Route To Coachella (04/12/15): Katy Perry And Her Entourage Had To Walk To The Coachella Festival In California On Saturday (11apr15) When Their Van Broke Down En Route From A Brunch Nearby.

Sleepy Katy Perry (04/2015): Katy Perry has admitted she likes to sleep a lot and says she regularly finds her day starting at noon and ending at 3am.

Why Katy Perry Is Keeping Her Hair Black: She's in Mourning (03/2015): Katy Perry won't be changing her hair color anytime soon. She's keeping her raven locks just the way they are—at least for now. "It's black [because]...

Katy Perry said her heart felt heavy after Auschwitz visit (02/2015): Pop singing sensation Katy Perry encapsulates fun and flamboyance in her songs, but when she's not performing on stage, the singer has a serious and reflective side too.

Katy Perry warns John Mayer (01/2015): Katy Perry has reportedly warned John Mayer than he is on his ''last chance'' with her after they rekindled their relationship.

Katy Perry's Rumored Boyfriend Diplo Welcomes Second Child With Ex-Girlfriend--S (11/2014): It's finally official! Diplo is now the proud father of two kids. The world-famous DJ welcomed his second son with a former girlfriend earlier this month. According to Entertainment...

Katy Perry Is Our Halloween Queen As She Dresses As A Giant Cheeto For Kate Huds (10/2014): Halloween's just been won. Might as well give up now.

Watch a teenage Katy Perry cry over her parents and call herself a “pizza face” (08/2014): Video has emerged of a young Katy Perry talking about make-up, having to take 9th grade twice, and missing her parents.

Katy Perry praised by president (07/2014): Katy Perry was praised by US President Barack Obama when she performed at a special dinner at the White House yesterday (31.07.14).

Katy Perry Not Happy With Divorce From Russell Brand - Now She Wants An Annulmen (06/2014): Katy Perry and Russell Brand have been officially divorced now for nearly a year and a half, but it turns out that isn't enough for the singer, who lost her heart to the legendary Lothario. Love's young dream once - Katy Perry with

Katy Perry Agrees — Watching Hamsters Eat Tiny Burritos Is The Best (04/2014): by Brenna Ehrlich 04/30/14 Are you having a rough day? Do your parents have you down? Is your BF/GF being a total you-know-what? Did someone… via Emag.co.uk

Katy Perry Dark Horse video edited (02/2014): The video for Katy Perry's track Dark Horse has been edited following claims from some Muslims it was blasphemous.

Katy Perry planning children? (11/2013): Katy Perry and John Mayer are planning to have children.The 'Roar' hitmaker is hoping to get pregnant with her 36-year-old boyfriend and the pair are...

Katy Perry's "Roar" Music Video Coming Soon, Releases Jungle-Themed Promo Pic! (08/2013): Katy of the jungle! What do you get when you mix a tiger, monkey, grass skirt and leopard-print bikini top? Why, Katy Perry in the music video for "Roar," of course. The...

'My Grandmother Is In Charge Of My Morals:' Katy Perry Admits Her Grandmother Ke (07/2013): Ann Hudson, 92 Is The Singer's Biggest Influence In Life...