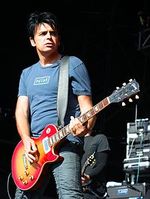 Gary Anthony James Webb (born 8 March 1958), better known as Gary Numan, is an English musician, singer, songwriter, composer, and record producer. He entered the music industry as the frontman of the new wave band Tubeway Army. After releasing two albums with the band, he released his debut solo album The Pleasure Principle in 1979, topping the UK Albums Chart. While his commercial popularity peaked in the late 1970s and early 1980s with hits including "Are 'Friends' Electric?" (which spent 4 weeks at #1 on the UK Singles Chart) and "Cars" (which spent one week as number one on the UK charts and reached number nine on the US Billboard Hot 100), he maintains a cult following. He has sold over 10 million records. More about Gary Numan

Current items with a signature of Gary Numan

These are the most current items with a signature of Gary Numan that were listed on eBay and on other online stores - click here for more items.

Traded items with a signature of Gary Numan

The most expensive item with a signature of Gary Numan (Tubeway Army Blue Vinyl 1978 Signed Gary Numan (Stunning Condition)) was sold in December 2018 for £450.00 while the cheapest item (GARY NUMAN The Pleasure Principle SIGNED NUMBERED PRINT 66/100 Fan Artist RARE) found a new owner for £0.99 in June 2021. The month with the most items sold (61) was June 2021 with an average selling price of £20.00 for an autographed item of Gary Numan. Sold items reached their highest average selling price in November 2016 with £113.50 and the month that saw the lowest prices with £0.99 was January 2014. In average, an autographed item from Gary Numan is worth £25.00.

Most recently, these items with a signature of Gary Numan were sold on eBay - click here for more items.

Gary Numan webchat – as it happened (03/18/15): He never listens to music, thinks America has better opportunities for women, and loves a Tesco shortcake. The electropop pioneer was here to answer your questions. Read the answers in full here 2.25pm GMT lipslikesugar writes: Not a question, just a thank you. Thank you for enlivening things and lo

Gary Numan, Frankie Cocozza: The TV biopics we want to see (12/28/14): Digital Spy ponders other legends of the screen who could make good TV biopics.

Gary Numan, Band of Skulls added to Sonisphere 2014 lineup (12/27/14): Gallows also join the lineup for this year's festival in Knebworth.

Gary Numan and Mary Vango: how we made Are 'Friends' Electric? (04/2014): Singer-songwriter Gary Numan and makeup artist Mary Vango remember getting a song about a robot prostitute to No 1 without anyone realising Gary Numan, singer-songwriter In 1978, I was fronting a three-piece punk band called Tubeway Army. We'd had a couple of unsuccessful singles, but our record com

Gary Numan to play Sonisphere 2014 Knebworth festival (03/2014): Organisers have released details of yet more acts set to take to the stage this summer.

Gary Numan: 'My First Tattoo Was Agony' (10/2013): Electro-pop pioneer Gary Numan has had his first tattoo at the age of 55, and was left in agony by the painful process.The Cars hitmaker has had a...

Gary Numan To Headline Cemetery Gig (09/2013): Electronic music pioneer Gary Numan has scheduled his most creepy gig - in a cemetery.The robot-voiced Cars singer will perform at the Masonic Lodge...

Five Songs To Hear This Week - Gary Numan, Washed Out, Factory Floor & more (08/2013): Jamie Skey sorts out this week's releases and the best new songs that have appeared online in the last seven days... (5 Aug)