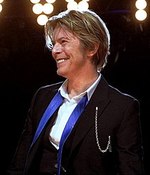 David Robert Jones OAL (8 January 1947 – 10 January 2016), known professionally as David Bowie (/ˈboʊi/ BOH-ee), was an English singer-songwriter and actor. A leading figure in the music industry, Bowie is regarded as one of the most influential musicians of the 20th century. He was acclaimed by critics and musicians, particularly for his innovative work during the 1970s. His career was marked by reinvention and visual presentation, with his music and stagecraft having a significant impact on popular music. More about David Bowie

Current items with a signature of David Bowie

These are the most current items with a signature of David Bowie that were listed on eBay and on other online stores - click here for more items.

Traded items with a signature of David Bowie

The most expensive item with a signature of David Bowie (DAVID BOWIE - Signed & Framed LP With Official Certificate of Authenticity) was sold in February 2020 for £5000.00 while the cheapest item (David Bowie Photo Hand Signed) found a new owner for £0.99 in September 2021. The month with the most items sold (50) was December 2019 with an average selling price of £18.00 for an autographed item of David Bowie. Sold items reached their highest average selling price in January 2017 with £425.00 and the month that saw the lowest prices with £3.49 was September 2017. In average, an autographed item from David Bowie is worth £35.00.

Most recently, these items with a signature of David Bowie were sold on eBay - click here for more items.

David Bowie "involved" in The Man Who Fell to Earth stage musical (04/10/15): The singer is reportedly working on new songs to feature in the production.

There’ll be no musical like a David Bowie musical (04/06/15): In a genre that often veers towards the naff, Lazarus should bring a little alienation and desperation – and makes oddly perfect sense in the context of his career A musical version of David Bowie’s 1976 film The Man Who Fell to Earth can’t have been high on many people’s lists of likely projects fo

David Bowie brings The Man Who Fell To Earth to Broadway to NYC stage (04/03/15): The British musician long known for his experimentalism has written new songs and arranged older music for the production late this year at the New York Theatre Workshop.

There’ll be no musical like a David Bowie musical (04/2015): In a genre that often veers towards the naff, Lazarus should bring a little alienation and desperation – and makes oddly perfect sense in the context of his career A musical version of David Bowie’s 1976 film The Man Who Fell to Earth can’t have been high on many people’s lists of likely projects fo

David Bowie tour rumours: Sorry, we've got bad news for you (03/2015): Web speculation suggests David Bowie might be about to hit the stage again. He isn't

David Bowie Is: Paris is next stop for touring exhibition on the British pop leg (02/2015): Visitors are invited to "turn and face the strange" at an exhibition showcasing the remarkable career of David Bowie, that landed in Paris on 27 February, as it makes its way around the world. Consisting of over 300 objects including handwritten lyrics, original costumes, photographs, and rare origi

The Making—and Remaking—of David Bowie (09/2014): One of the greatest artists of all time, Bowie has never stopped reinventing himself. A new exhibit looks back at his rise to fame in all its messy, transfixing glory.

Susan Sarandon had a secret relationship with David Bowie (07/2014): The Last of Robin Hood star confessed she dated the Space Oddity singer more than 30 years ago

The Thin White Doc: New Doctor Who based on David Bowie (06/2014): EVERY new Doctor Who puts a unique spin on the character – and Peter Capaldi is no exception.

David Bowie Exhibition Heads To Berlin (04/2014): Career spanning show moves to Germany... David Bowie's comeback was one of 2013's most stunning events. New album 'The Next Day' won overwhelmingly positive praise, while a sensational retrospective at the V&A took in the entirety of the icon's career. Well, that show is now heading to Berlin. 'Davi

Crossword roundup: banter with David Bowie (03/2014): Justifiable confusion and an attempt at a moustache in our pick of the best cryptic clues Unique solutions? I think often of Paul 's clue … 25ac Misshapen genitals , funny things? (3,5) … for TAG LINES , because it was identified by Guardian crossword editor Hugh Stephenson as an example of cryptic

David Bowie plea against Scottish Independence (02/2014): Veteran star David Bowie made an unexpected intervention in the independence debate when he used his victory speech at last night’s Brit Awards to urge Scotland to remain part of the UK.

Will David Bowie be a winner at The Brit Awards 2014? We assess the Brits conten (01/2014): Can Bowie batter the competition? David Bowie had an eventful 2013, it has to be said. The typically reserved star shocked the world when he released The Next Day in March, marking his first album in a decade.

The David Bowie quiz of 2013 (12/2013): Quiz: The pop legend returned out of the blue with a new album ... but who dismissed him as 'a switch-hitting bisexual senior citizen'? Alexis Petridis

David Bowie Performs 'I'd Rather Be High' In Louis Vuitton Advert (11/2013): The Icon Plays The Harpischord At A Venetian Ball

Brentwood Gazette published Does this new foal look like David Bowie? (08/2013): A NEW FOAL that looks "a bit like David Bowie" caused a stir as visitors flocked to an animal sanctuary open day on Sunday.The gates were thrown open to visitors to learn about the animals cared for by Hopefield Animal Sanctuary in Sawyers Hall Lane, Brentwood.Hundreds enjoyed seeing an array of ani

David Bowie School Films Tribute Video (07/2013): Pupils at David Bowie's former school have feted the institution's most famous student by creating a tribute video in his honour.Pupils at the Ravens...

David Bowie?s olden years (06/2013): MUSIC legend, who was spotted in Venice, should really Cha-ch-ch-ange his outfit

David Bowie has not always been appreciated (05/2013): DAVID BOWIE is back in the charts and being celebrated with an exhibition of his more outlandish outfits at the Victoria & Albert Museum in London.