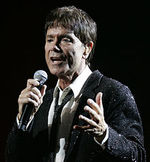 Sir Cliff Richard OBE (born Harry Rodger Webb; 14 October 1940) is an English singer, musician, actor, and philanthropist who holds both British and Barbadian citizenship. He has sold more than 250 million records worldwide, making him one of the best-selling music artists of all time. He has total sales of over 21.5 million singles in the United Kingdom and is the third-top-selling artist in UK Singles Chart history, behind the Beatles and Elvis Presley. More about Cliff Richard

Current items with a signature of Cliff Richard

These are the most current items with a signature of Cliff Richard that were listed on eBay and on other online stores - click here for more items.

Traded items with a signature of Cliff Richard

The most expensive item with a signature of Cliff Richard (Sir Cliff Richard Autographed Guitar for chART Children's Hospice Arts Charity.) was sold in October 2018 for £620.00 while the cheapest item (HAND SIGNED AUTOGRAPH, BLACK & WHITE PRINT, CLIFF RICHARD, SINGER) found a new owner for £0.99 in September 2020. The month with the most items sold (120) was November 2020 with an average selling price of £41.70 for an autographed item of Cliff Richard. Sold items reached their highest average selling price in August 2017 with £74.99 and the month that saw the lowest prices with £0.99 was April 2017. In average, an autographed item from Cliff Richard is worth £16.99.

Most recently, these items with a signature of Cliff Richard were sold on eBay - click here for more items.

‘I was in shock, but I said ‘of course’’ - Cliff Richard impersonator proposes a (04/09/15): Mr Chandler, 52, chose the show at Cromer’s Pavilion Theatre to propose to his girlfriend Claire Reynolds in front of hundreds of people. Thankfully she said “Yes”, and the couple are planning a register office service in August before flying to France for a church wedding.

Agony etched on Sir Cliff Richard's face as sex case takes its toll on star (04/07/15): Looking gaunt and dejected, Sir Cliff Richard is clearly feeling the strain of being investigated over claims he sexually abused a young boy. The pop veteran’s face was etched in pain as he waited at Barbados airport for some friends to arrive from America.

Sir Cliff Richard 'has no idea' who historical sex abuse accuser is, star's pal (03/27/15): Distraught Sir Cliff Richard has no idea who has accused him of historical sex abuse , a close pal has said. Bonnie Lythgoe, 65, who has been staying with the star in Barbados, said: “I know Cliff well and I have just been with him on holiday, he’s so distraught and so, so upset.

Police and BBC are savaged over Sir Cliff Richard raid (03/2015): An independent review was ordered after Sir Cliff first saw the raid on his £3.5million Berkshire home on TV last August - and the scathing findings have now been seen exclusively by the Mail.

Cliff Richard's lawyers accuse MPs of damaging singer (02/2015): Sir Cliff Richard's lawyers have written to Home Affairs Committee chairman Keith Vaz MP accusing the committee of causing the singer "a further round of unnecessary and extremely damaging media coverage with no due process" by publishing a letter about the South Yorkshire Police sex abuse investiga

Cliff Richard raid on RTS shortlist (01/2015): The coverage of a controversial police raid on the home of Sir Cliff Richard is nominated for a Royal Television Society award.

Pictures: Cliff Richard delighted to be back in studio recording 101st album (10/2014): Sir Cliff Richard looks happy to be back in a recording studio two months after he was quizzed on sexual assault allegations. The singer has kept a low profile since he was questioned over a claim he abused a 15-year-old boy at a Billy Graham religious event in 1985.

Cliff Richard selling £3million penthouse after being 'violated' by police raid (09/2014): Sir Cliff Richard plans to sell his £3million Berkshire penthouse, telling friends he feels “violated” by the police raid last month. The singer, 73, told close pals that he can no longer return to the Sunningdale apartment because he is disturbed by the thought of detectives rifling through his bel

Cliff Richard relaxes in Portugal in first pictures since police raid Berkshire (08/2014): Sir Cliff Richard, whose Berkshire home was raided by police 12 days ago, was pictured sipping champagne with friends at a restaurant near Guia, Portugal.

Cliff Richard wants to top the American charts (06/2014): Cliff Richard has had 14 UK number one hit singles, aside from hits in Europe and Asia, but the 73-year-old singer hasn't stopped wanting to be big in the US.

Worst Music Videos Of All Time: From Avril Lavigne And Kanye West To Cliff Richa (04/2014): Avril Lavigne ’s new music video is - at best - an irritating and unforgivable assault on both the eyes and ears. At worst, it's another example of ignorant cultural appropriation from a pop princess desperate to get some attention. Everything about the vide

Sir Cliff Richard Sam Bailey and the reality talents (12/2013): FOLLOWING in The X Factor tradition, the winner of this year's show Sam Bailey has stormed to the top of the charts to gain the Christmas number one spot.

Cliff Richard insists he's still cool as BBC viewers question his hair 'do (11/2013): BBC viewers took to Twitter earlier this morning after Sir Cliff Richard's appearance on BBC Breakfast lead them to speculate as to whether or not he was wearing a wig.

Sir Cliff Richard: Night Diana and I serenaded Princes William and Harry (09/2013): IT is apt that Sir Cliff Richard's 100th album is a collection of rock 'n' roll standards, since that is where it all began for him.