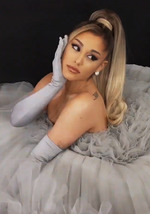 Current items with a signature of Ariana Grande

These are the most current items with a signature of Ariana Grande that were listed on eBay and on other online stores - click here for more items.

Traded items with a signature of Ariana Grande

Most recently, these items with a signature of Ariana Grande were sold on eBay - click here for more items.

Ariana Grande Is Helping Rehome 15 Dogs, Could She Be Any Cuter? (03/20/15): The pint sized pop princess is going to have a whole lot of good karma come her way after this…!

As If Ariana Grande & Big Sean Couldn't Get Any Cuter — This Secret Handshake Tr (03/19/15): Their relationship is too stinkin' cute! Ariana Grande and Big Sean have been together for what seems like forever and their love for each other just gets more and more adorable with each passing day! Both superstars even shared on their respective Instagram accounts a secret handshake they created

Ariana Grande Has A Near Death Experience! Find Out About Her Inflight Scare HER (03/18/15): Oh no, Houston we have a problem! That's right, while on a flight to Houston, Ariana Grande experienced every flier's nightmare: an altitude drop so drastic that the oxygen masks started to drop down! [ Related: Big Sean Gets Super Candid About His Chick's 'P*ssy'! ] According to her friend Alfredo

Ariana Grande rapped to Big Sean (03/13/15): Big Sean loves the fact Ariana Grande has always been a fan of his music and she even rapped one of his songs when they first met.

Ariana Grande Reveals She Almost DIED On Her Honeymoon Tour! Watch The Singer Te (02/2015): Scaryyyy! Ariana Grande just started her first headlining tour and she almost died or injured herself very badly doing so… Like, no joke! The Love Me Harder singer recently started a video diary to capture moments on her Honeymoon tour — and she just had to share a story of her almost getting trappe

Ariana Grande Opens Up About Heartbreak Over The Holidays (12/2014): Pop star Ariana Grande 's festive season is always tinged with sorrow as she has had her heart broken multiple times over the Christmas holidays.

Ariana Grande respondes to Bette Midler calling her a wh**e (11/2014): The Wind Beneath My Wings singer slammed the former Nickelodeon star for being too sexual

Ariana Grande, Big Sean Spotted Holding Hands After SNL Party (09/2014): The rapper was there on the sidelines to support his girl as she performed at the 40th season premiere of Saturday Night Live...